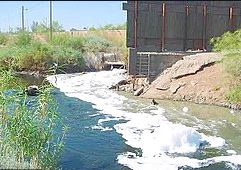 Chhattisgarh Environmental Protection Board has effectively controlled the water pollution caused by water polluting industries and it is also being continuously monitored. Besides, water quality monitoring of natural water sources is also being done. It has also been ensured by all the Regional Offices of the Mandal that all the water-polluting industries set up in the state operate along with the establishment of a contaminated water treatment plant. In this case, action is taken for shutting down industries and power disconnection and if necessary, court proceedings are also taken. It has also been informed by the Chhattisgarh Environmental Protection Board that the water reaching the Kharun river from Bhanpuri, Urala and Siltra industrial areas is not affecting the quality of drains and Kharun river in any way. Most of the industries located in these areas are not in a state like air polluting nature and the discharge of contaminated water from them to the river drain. There is no such water-polluting industry in the area, which does not have a contaminated water treatment plant. Similarly, the quality of natural water resources in the main rivers of the state – Mahanadi, Shivnath, Kharun, Arpa, Hasdeo, Kelo, Shankhani-Dankani, Mand, Indravati is being constantly monitored by the Mandal. For this, various sampling points have been made, from where samples are taken to check the quality of water sources. Water sampling should be carried out by sampling continuously at 8 sampling points in the major rivers of the state, 4 in Kharun river, 4 in Hasdeo river, 6 in Shivnath river, 2 in Kelo river, 1 in Indravati river and 1 point in Shankini river. Has been In the investigation conducted by the board, water quality in Mahanadi, Shivnath, Kharun, Arpa and Kelo rivers is Indian Standard IS. Category-C under 2296 That is, it is found to be potable after conventional treatment. Apart from these test samples, water quality monitoring of all major rivers and their tributaries and main lakes, dams and ponds is also being done by the Board. BOD in water Volume of within 03 mg and D.O. Has been found to contain 5-6 mg, which are in line with the prescribed standards. Under the guidance of the state government, sewage treatment plants are being set up for improvement in 05 rivers of the state, Mahanadi, Shivnath, Kharun, Arpa and Kelo, some of which are affected by domestic contaminated water. In this sequence, NGT According to the instructions given by the state, all the urban bodies have been directed to set up and run a contaminated water treatment plant for the treatment of contaminated water generated from the urban areas before 1 July 2021. Consequently, action is being taken to set up sewage treatment plants in various drains for treatment of domestic contaminated water