Containment zones in Delhi go up from less than 1,000 to nearly 24,000 within fortnight 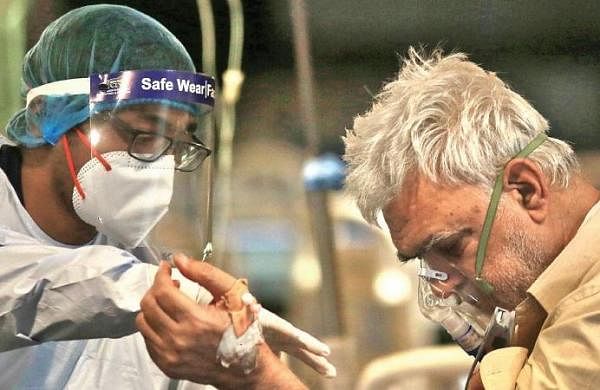 NEW DELHI: Amid the soaring COVID-19 cases in Delhi, the number of containment zones have gone up from less than 1,000 to nearly 24,000 within the past fortnight, officials said on Thursday.

There were 800 containment zones in the national capital on December 30, 2020.

According to the latest official figures, the number rose to 23,997 by mid-January.

South Delhi topped the list of 11 districts in the city with 8,383 containment zones.

The districts with higher number of containment zones included West Delhi at 4,109, Central Delhi at 3,493, and New Delhi at 2,354.

A residential area or an apartment is contained usually if three coronavirus-infected people live there.

However, district authorities have discretionary powers to declare a residential area a containment zone if even one person is found infected.

Most of the containment zones in Delhi are micron ones with less than three patients.

Currently, an infected person with mild symptoms or without any symptom has to undergo seven days’ home isolation.

The Delhi government has suspended routine and elective surgeries at the LNJP and the GTB hospitals to deal with the surging coronavirus cases in the national capital, officials said.

Delhi on Thursday reported 28,867 COVID-19 cases, the sharpest single-day spike since the pandemic began, and 31 deaths, while the positivity rate surged to 29.21 per cent, according to health department data.

ALSO READ: Only hospitalisation data can’t determine if peak is over – Experts on COVID wave in Delhi

“In view of the surge in the number of Covid-19 cases in Delhi, it is hereby directed that routine/elective surgeries shall be suspended in LNH and GTB Hospitals of GNCTD, till further orders,” an order issued on January 11 said.

According to Delhi Corona app, the LNJP Hospital has 750 designated oxygen beds for Covid patients and 154 of these are occupied.

At GTB Hospital as well, there are 750 beds and 41 are occupied.

Delhi on Thursday reported 28,867 COVID-19 cases, the sharpest single-day spike since the beginning of the pandemic, and 31 deaths, while the positivity rate surged to 29.21 per cent, according to health department data.

According to the data, Thursday’s positivity rate is the highest since May 3, when it was 29.6 per cent.

On Wednesday, Delhi had logged 40 deaths, the highest since June 10 last year, when 44 fatalities were recorded.

The city had recorded 23 deaths on Tuesday and 17 each on Monday and Sunday.

A total of 164 Covid deaths have been recorded in the first 13 days of January.

Most of these patients had comorbidities, according to government data.

The capital saw 130 fatalities in the last six months — nine in December, seven in November, four in October, five in September and 29 in August.

In July, Covid claimed 76 lives in the city.

The national capital currently has 94,160 active Covid cases, of which 62,324 are in home isolation, the health department bulletin stated.

At present, 2,369 Covid patients are admitted to Delhi hospitals.

Of these, 98 are on ventilator support, it said.

Earlier in the day, Health Minister Satyendar Jain said hospital admissions due to Covid have stabilised in the city over the last four days, but the number of cases and the positivity rate have seen an increase.

The city’s death audit committee, which met on Wednesday, found that fatalities have mostly occurred among those with co-morbid conditions, the minister said.

According to its analysis, most of the 97 Covid patients who died between January 9 and January 12 had co-morbidities.

Seventy of them were not vaccinated and 62 were aged below 60.

Eight of them were aged above 80.

Jain told reporters that the hospital admission rate when 27,000 cases are being reported is the same as when 10,000 cases were recorded.

“This is an indication that the wave has plateaued,” he said, adding that the hospital admission rate is a “major indicator of the situation” and not the number of infections or the positivity rate.

He expressed hope that cases will start declining soon.

In his view, there is no need for increasing the number of beds in hospitals at present.