Conservation of wildlife by planting trees on the deserted hill 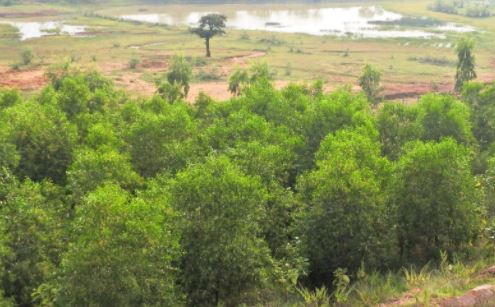 To see how MNREGA (Mahatma Gandhi National Rural Employment Guarantee Scheme) is playing an important role in saving the natural resources, ecosystem and water, forest and land, it is enjoyable to see the bears playing among the trees grown on the mountain of Masania. The scene should be interviewed. With the convergence of the schemes of the MNREGA and the Forest Department, not only the mountain has been covered with trees, but several check-dams have also been made for water conservation. The unique example of strengthening the co-existence of human and wildlife with human efforts is the work done by the MNREGA and the Forest Department in the mountains of Masania and its surroundings.

Until a few years ago, there was no trace of greenery on the Masania mountain adjacent to the village of Masniakala and Masniakhurd of Sakti development block in Janjgir-Champa district. Desperate from trees and plants, there was lack of food and drink on this hill, then bears and other wildlife came to the village. As a result, bears and villagers started to come face to face again and again, sometimes the bears were injured. Due to hunger, bears also started harming crops. Due to this, fear started prevailing among the villagers and they started looking for a way to get rid of this problem. The villagers discussed among themselves and planned to preserve the bears in the mountain and forest itself. It was considered to plant saplings in the Masniakala Gram Panchayat and the dependent village of Masniakhurd so that the bears get food in the forest itself and do not come towards the village. For this, with the convergence of schemes of MNREGA and Forest Department, the way of planting trees on the mountain was taken out. In the year 2017-18, the plan for the next five years was prepared and implemented. Mixed plants were planted on about 25 acres of land, which included 25 thousand saplings of teak, doom, khamhar, berries, mangoes, bamboo, shishu, arjuna, casiacemia and plum.