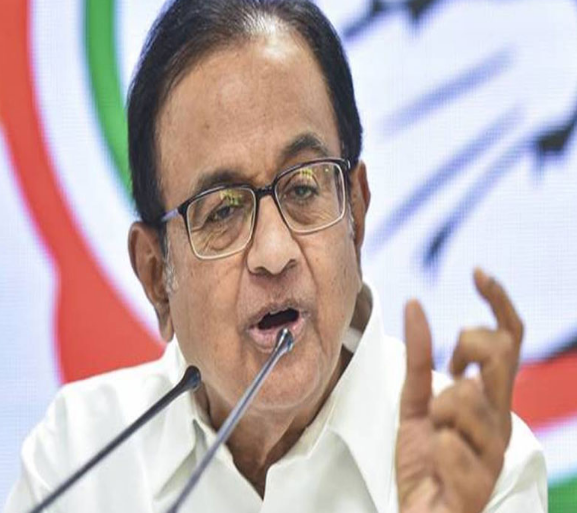 The Congress on Monday attacked the Central Government soon after the country’s Gross Domestic Product (GDP) plunged to (-) 23.9 per cent during the first quarter of Financial year 2020-21 saying the “fake narrative” has been exploded.

Addressing a virtual press conference, former Finance Minister P. Chidambaram said, “The CSO has released the provisional estimates of GDP for the quarter April-June 2020. And the GDP in the first quarter has declined by a whopping 23.9 per cent.”

Taking a swipe at the government, Chidambaram said, “The Finance Minister who blamed an ‘Act of God’ for the economic decline should be grateful to the farmers and the gods who blessed the farmers. As the only sectors that have grown at 3.4 per cent are Agriculture, Forestry and Fishery.”

Chidambaram further said that every other sector of the economy has declined sharply, some precipitously. Lamenting at the government, he said that the estimates do not come as a “surprise” to us.

He also pointed out that the economic tragedy was foretold by many close observers of the Indian economy, most recently by the Reserve Bank of India (RBI) in its Annual Report released a few days ago.

Chidambaram said, “All these had been anticipated, we had warned the government and we had urged the government to take preventive and pre-emptive measures.” The Congress leader said that our pleas fell on deaf ears.

“The country, as a whole, is paying a heavy price, the poor and the vulnerable are in despair. It is only the Modi government that was nonchalant and uncaring. The government peddled a fake narrative, but that narrative has been exploded today by the CSO estimates,” he said.

He further noted that it will take many months before the economy turns the corner and registers positive growth. “The inaction and ineptitude of the government gives us no hope that we will see light at the end of the tunnel at any time soon,” Chidambaram added.