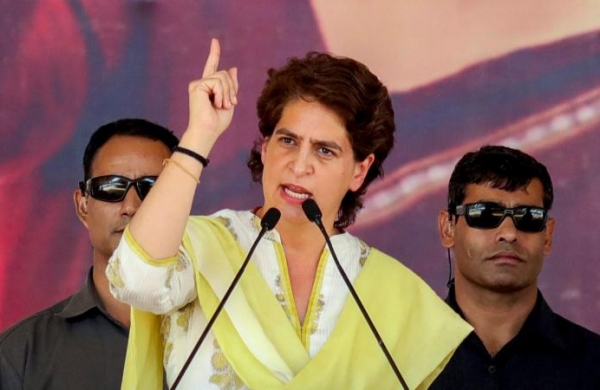 By PTI
NEW DELHI: The Congress on Friday alleged that the government is trying to divide and intimidate the farmers to break their protest against the three agri laws with former party chief Rahul Gandhi saying that it was time to “choose a side” and he was with the peaceful movement of the tillers.

Congress leader Priyanka Gandhi Vadra claimed that on Wednesday night, there was an attempt to finish the farmers’ protest by force and on Thursday farmers were being threatened at Gazipur and Singhu borders.

“This is against every rule of democracy. The Congress will stand by farmers in this struggle. Farmers are the country’s interest. Those who want to break them are anti-national,” she said in a tweet in Hindi.

There should be strong action against violent elements, but those farmers who are protesting peacefully since months, the whole strength of the people of the country is with them, the Congress general secretary said.

Former Congress chief Rahul Gandhi said in a tweet in Hindi, “It is time to choose a side. My decision is clear. I am with democracy, I am with farmers and their peaceful movement.”

Earlier, at a press conference, senior Congress leader Mallikarjun Kharge said that the government was not able to solve the farmers’ issue after 10 rounds of talks and then the government found a way to divide these farmers.

“They tried to divide the farmers and they also succeeded a bit,” he said.

Two farmer unions — the Bharatiya Kisan Union (Bhanu) and the Rashtriya Kisan Mazdoor Sangathan — on Wednesday withdrew from the ongoing agitation on Delhi’s borders against the three farm laws, a day after violence broke out in the national capital during the tractor parade.

Kharge asserted that the party strongly stands behind farmers’ peaceful movement and will take up the issue of repeal of the three farm laws in the upcoming Parliament session.

At the press conference, another senior Congress leader P Chidambaram said there is a widespread belief that the incidents at the Red Fort were instigated by sections close to the BJP and that any government with even a rusty intelligence machinery should have known that something like this will happen.

“The fact that they allowed tractors to enter the Red Fort complex and the police stood by while no more than 500 so-called farmers, protesters climbed on the ramparts and raised the flag, shows the connivance between the government and the so called protesters,” he said.

“So, all this means the buck stops at the Home Minister’s table…he should answer whether there was intelligence failure, he should conduct a probe into whether there was connivance between sections of the BJP or BJP supporters and the so-called protesters who entered the Red Fort,” Chidambaram said.

Asked about Union minister Prakash Javadekar’s remarks that Rahul Gandhi had always worked to provoke protestors, Chidambaram said, “Well, I don’t think you should take the minister for misinformation and broadcasting very seriously. He has his standard reply for anything that happens in the country, he will blame Mr. Rahul Gandhi and the Congress Party. Has he ever responded in a different way?”