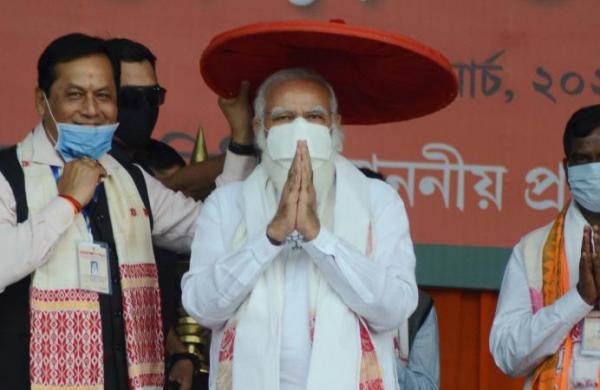 Express News Service
GUWAHATI: Raking up the Toolkit issue, Prime Minister Narendra Modi on Saturday said the people in the country would not forgive the Congress for openly supporting those who were trying to destroy the identity of Assam tea.

“As I have come to you, I cannot help telling you of a pain I am going through. You must have heard about Toolkit in recent times. A global conspiracy was hatched to defame Assam tea and Yoga which is a gift by the sages. The conspirators want the Assam tea gardens to suffer huge losses… The Congress, which ruled the country for 50-55 years, is openly supporting the conspirators. How does it dare seek votes in Assam? Can we forgive the party?” Modi asked a crowd while addressing a rally in Assam’s Chabua.

The Toolkit is a document that educates and amplifies the cause of the protest. On February 4, Swedish climate activist Greta Thunberg had tweeted a toolkit related to the farmers’ protest in India.

ALSO READ | The game is over: PM Modi, BJP lash out at Mamata Banerjee in Bengal

The Chabua constituency in Upper Assam, which is a tea belt, has a sizeable number of tea garden voters. “There is tea in the name Chabua. We all know how the tea of Chabua is spreading its aroma worldwide…Who can understand the problems of tea workers better than a chaiwala,” Modi said.

He claimed the Congress was steadily getting squeezed. “The Congress was once the biggest party of the country. But, it is now constantly getting squeezed. There is no respect for talent in it today. What matters the most for the Congress is the lust for power. It can take the help of any and give support to any for power. It does not matter for them if lies are needed to be told for it. With false promises, he has come to Assam on a tour. Be wary of him,” the PM said, alluding to Congress leader Rahul Gandhi who is in the state.

Modi claimed Assam constantly required the BJP and the NDA for the maintenance of peace and stability. He said the time was very crucial for the state. “From land to art, Assam has huge potentials for progress. We have to be vocal for local. We have to constantly work to take Assam to greater heights. Only the double engines of Central and Assam governments can do this work,” he said.