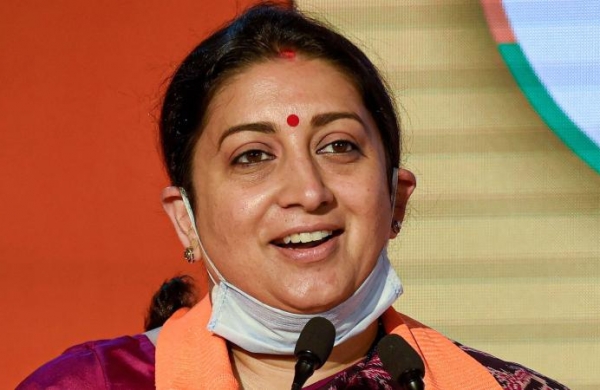 By PTI
MARIANI: Union Textiles Minister Smriti Zubin Irani on Saturday described Congress as the “most corrupt party” and appealed to the people to vote for the BJP to continue to avail benefits of various central and state schemes.

Addressing her maiden election campaign rally in Assam, she said Prime Minister Narendra Modi and Chief Minister Sarbananda Sonowal have rolled out a number of schemes, benefitting the poor people of the state.

“There is no one more corrupt than Congress. Only BJP is the party, which works for the benefit of the poors.

“The BJP government has worked tirelessly for the people in tea gardens across the state,” said Irani, also the Minister of Women and Child Development.

Irani had defeated Congress leader Rahul Gandhi in his family seat of Amethi in Uttar Pradesh in 2019 general election.

Listing out a series of schemes launched by the central and state governments, she said the Congress government never worked for the poor people and appealed to the people to vote for the BJP in the assembly polls.

Without naming former Prime Minister Manmohan Singh, who was a Rajya Sabha MP from Assam, Irani said “There are some tall leaders of Congress from Assam who even became PM. But, AIIMS came to Assam only during Narendra Modi’s tenure.”

She was in Mariani to campaign for BJP candidate Ramani Tanti, who is facing a direct contest with the sitting three-time heavyweight Congress MLA Rupjyoti Kurmi.

Mariani constituency will go to polls in the first phase on March 27.