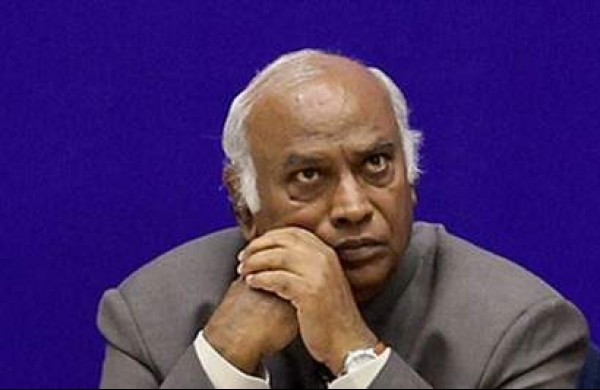 Participating in the discussion on a motion thanking the President for his address to the joint sitting of Parliament at the start of the Budget Session, Kharge said the schemes such as the Pradhan Mantri Fasal Bima Yojana, mentioned in the President’s speech, was actually a “punjipati munafa yojana (a scheme for profit of capitalist)”.

“When Modi ji became Prime Minister in 2014, within a month on June 12, an order was issued to states that if any state government pays any bonus to the farmers above the MSP (minimum support price), then it would stop procurement on MSP from that particular state,” he claimed.

Terming it a “shoshonkari aadesh” (order of exploitation), he said that after this, the state governments stopped granting a bonus to the farmers on MSP.

Taking a jibe at the government, Kharge said, “This was done by you for the welfare of farmers”.

“You have also conspired along with capitalist to capture farmers’ land,” he alleged.

The government “never implemented the recommendations of the Swaminathan Commission of A2+FL and C2…. If they have implemented the commission’s report, then we could say that the Modi government is working for farmers,” he added.

The government did not add the comprehensive cost (C2) for arriving at MSP.

Though the Modi government always claims that the previous Congress government did not raise the MSP, but the truth is otherwise.

“During the tenure of the Congress government, MSP of crops was increased up to 219 per cent.

Just opposite to that under the Modi government, MSPs for main crops such as paddy and wheat have been increased by only 141 per cent,” he said.

Citing data from the Directorate of Economics and Statistics, Kharge said growth on MSP on paddy (general) under the UPA I was 10.92 per cent on average and under the UPA II, it was increased 8.9 per cent, while under the NDA increase was 4.30 per cent only.

“These are your data and are published,” he said.

“For how long you would be lying. How long you would survive by defaming Congress by asking as what it has done in past 60-70 years,” he said, suggesting the ruling party to speak the truth on MSP.

On the Pradhan Mantri Fasal Bima Yojana, Kharge said, “A premium of Rs 99,073 crore was collected in the name of crop insurance and farmers were given only Rs 26,012 crore.

” On the Kisan Samman Nidhi, he said that agricultural cost has gone up by at least Rs 15,000 per hectare whereas the government is giving only Rs 6,000 annually to farmers under the scheme.

Kharge said that this country is witness to several farmer movements in history.

Participating in the discussion, Shamsher Singh Manhas of the BJP said the erstwhile state of Jammu and Kashmir was neglected by previous governments.

Prime Minister Narendra Modi is now working towards the development of Jammu and Kashmir and is ensuring funds are available for that.