Congress is weakening, ‘G-23’ has come together to strengthen it: Dissenters at Jammu meet 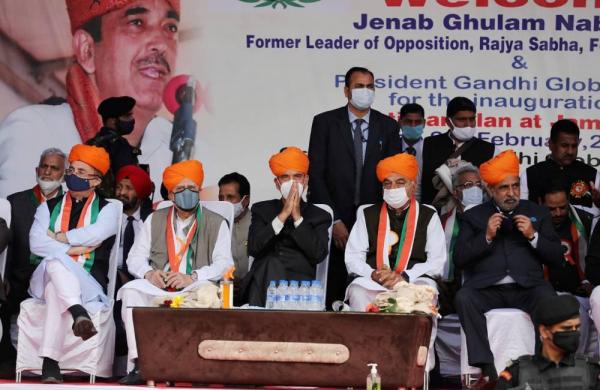 By PTI
JAMMU: In a public show of dissent, the ‘G-23’ leaders, including Ghulam Nabi Azad, Anand Sharma and Kapil Sibal, who have been pressing for a leadership change and organisational overhaul in the Congress, gathered on one stage here on Saturday, saying the party is weakening and they have come together to strengthen it.

“It is an occasion to speak the truth and I will speak the truth. Why have we gathered here? The truth is we can see that the Congress is weakening. We had gathered earlier also and together we have to strengthen the Congress,” Sibal said addressing an event dedicated to Mahatma Gandhi.

The event was also attended by several other Congress leaders like Bhupinder Singh Hooda, Manish Tewari, Vivek Tankha and Raj Babbar of the group, now called ‘G-23′, which had triggered a storm in the party last year with their letter to Congress chief Sonia Gandhi, expressing unhappiness over its functioning and demanding a full-time party president.

The Congress leaders praised Azad for his contribution, with Sibal saying he is unable to understand why the party is not using the experience of a person like him.

Azad, who was among the vocal letter-writers and was not given a renomination after his Rajya Sabha tenure ended recently, said he has only retired from the Upper House and not from politics.

He was the Leader of Opposition in Rajya Sabha.

Asked about the Jammu meet of the leaders, the Congress said they were senior and highly respected members of the party and their best contribution to the Congress’ cause would be to get active in five poll-bound states and strengthen the party there.

However, it did not comment on the leaders’ concern over the “weakening” of the Congress.

In Jammu, Anand Sharma echoed his party colleague Sibal saying that the party has weakened over the last decade.

ALSO READ | Congress again on brink of split, will start from J&K this time around: BJP

He said none of the leaders present there have come into the party through shortcuts and nobody has the right to tell “if we are Congressmen or not”.

He said they can visit any part of India and have come here to send a message that they are thankful for Azad’s contribution and are standing with him A party can make you an office-bearer but only a few who are recognised by the people go on to become leaders, he said at the event, where the Congress leaders, wearing saffron headgears, posed for pictures.

Hooda said there are two kinds of people in Congress.

“Some who are in Congress and others like Azad who have Congress in them.”

“All of us have covered a very long distance to reach where we are today. We have not come from above, through the window or the skylight, all of us have walked through the door. We have come through the students’ movement and the youth movement,” Anand Sharma said.

“I have not given anyone the right to tell me if we are Congressmen or not. Nobody has that right. We will build the party. We will strengthen it. When the Congress is united, it will also raise the morale of the people of the country,” he said.

This is the first time that the dissenters have together publicly vent out their anger and comes ahead of elections in Kerala, Assam, West Bengal, Tamil Nadu and Puducherry.

“I have no hesitation in saying an organisation can give you an office. The Congress can make you an office-bearer but not every office-bearer can become a leader. Only some become leaders, those who are recognised by the people, not just in one state but far off in Kerala, Maharashtra, Punjab, UP and Karnataka,” Sharma said.

Former Haryana chief minister Hooda said only when the Congress and the opposition are strengthened, will the country be strengthened.

“With their firm resolve, Mahatma Gandhi’s 23 will work to strengthen Congress and make Congress victorious,” the former UP Congress chief said.

“We promise those who are sitting here and many more who are outside and support us, that we will work to strengthen the party.”

The Congress leaders also supported the demand for restoration of statehood of Jammu and Kashmir.

Later, speaking to reporters, Azad said that the party has weakened over the years and they will work to strengthen it.