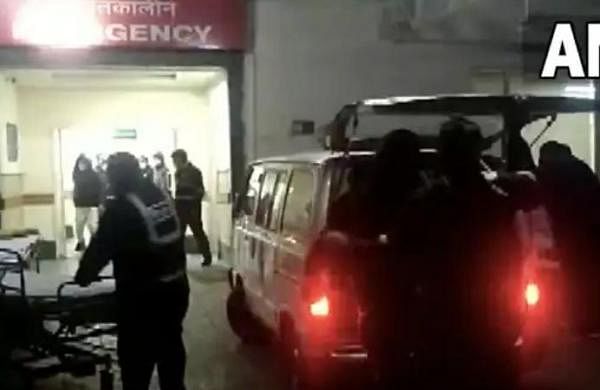 JAMMU: Attributing the death of 12 pilgrims in a stampede at Mata Vaishno Devi shrine to the ‘grave negligence’ of the administration, the Congress party on Saturday demanded a Rs 50 lakh compensation to families of those killed and Rs 10 lakh to the injured in the ‘tragic’ incident.

The J&K unit of Congress demanded the enhanced compensation over and above Rs 10 lakh announced for the next of kin of the deceased and Rs 2 lakh to the injured.

At least 12 pilgrims were killed and over a dozen others injured in a stampede at Vaishno Devi shrine atop Trikuta hills in Reasi district of Jammu and Kashmir in the early hours of the day.

Lt Governor Manoj Sinha ordered a probe into the incident and also announced a compensation of Rs 10 lakh to the next of kin of each deceased person and Rs two lakh to each injured.

“The incident is the result of the grave negligence on the part of the administration and management. We demand a high-level probe into the tragedy and adequate ex gratia relief of Rs 50 Lakh for fatalities and Rs 10 Lakh to each injured,” Mir told reporters here.

The Congress leaders present at the press conference including Desai expressed shock over the tragedy at the holy shrine and sympathies for families of those killed.

The AICC Seva Dal chief said the increase in GST rates on items of common use by Prime Minister Narendra Modi-led government is a New Year gift to the people of the country, who are already reeling under high inflation and rising unemployment.

“On every New Year day, we used to wish each other happiness and prosperity, like for the last seven years, this year also the gift given to the people of the country by the Modi government is price rise and inflation,” the Congress leader said.

“The Modi government gave a New Year gift to all of us in the form of Inflation. This new inflation is coupled with a consistently high unemployment rate above 7.5 per cent during most of the year 2021,” he said.

He said the inflationary pressure is mounting, with November 2021 WPI at 14.23 per cent, which is at over a 10-year high, and its impact is likely to be felt more acutely in the year ahead.

“As we usher in the New Year, be prepared to spend more on basic items of daily use — what to say about luxury goods. From buying clothes and footwear to withdrawing our own money from ATMs is going to be expensive,” he said.

In a statement issued here, Singh urged the administration to provide free of cost treatment to the injured and adequate ex gratia to the families of the deceased.