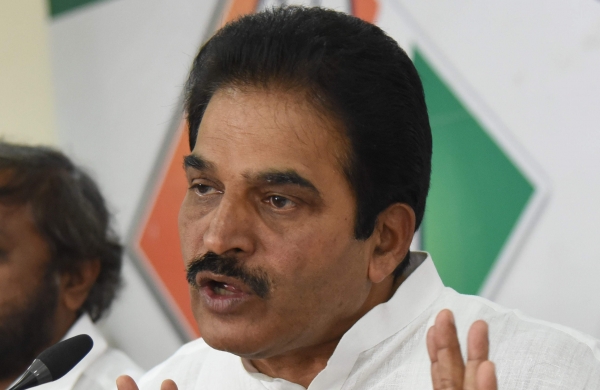 By PTI
NEW DELHI: The Congress on Friday extended support to the countrywide ‘chakka jam’ called by farmer unions on February 6, saying party workers will stand shoulder to shoulder with farmers in their protest.

The Congress also hit out at Union Agriculture Minister Narendra Singh Tomar, who defended the three new farm laws and criticised the Opposition while speaking in Rajya Sabha. Whatever the agriculture minister said was “not only totally bereft of facts” but also “grossly objectionable”, the party claimed.

Farmer unions on Monday had announced ‘chakka jam’ on February 6 when they would block national and state highways for three hours in protest against the internet ban in areas near their agitation sites, harassment allegedly meted out to them by authorities, and other issues.

Congress general secretary (organisation), KC Venugopal, said the party fully supports the farmers’ movement and appeals to the government to climb down from the “high horse of false and misplaced pride”, and accede to the justified demands of the farmers by repealing the three farm laws.

On February 6, when the farmer organisations will hold a three-hour nationwide ‘chakka jam’ from 12 pm to 3 pm in a non-violent and peaceful manner on the national and state highways, the Congress will extend its full support to farmer groups, Venugopal said in a statement.

He said that Congress workers in solidarity with the protesting farmers will stand shoulder to shoulder in this “symbolic and Gandhian” way of protest. Venugopal noted that farmers’ organisations have already exempted emergency and essential services from this protest. “Joining in the spirit, Congress workers will take full care that the ambulance services, school bus, elderly, patients and women and children are not inconvenienced due to the bandh call,” he said.

Venugopal said that this farmers’ movement, which is being steadfastly supported by the poor, farm labour, SCs, STs, OBCs as well as every “right- minded Indian”, is not only aimed at protecting agriculture and farming but also saving the public distribution system.

“However, the power drunk Modi government is trying every mean trick of the trade to tire out and defame the protesting millions. Even today, the Union Agriculture Minister (Narendra Singh Tomar), while speaking in the Parliament, blatantly tried to mislead the House and the nation,” Venugopal alleged.

It is public knowledge that the farmers’ organisations have held eleven rounds of talks with the government during which they provided point-wise detail of the deficiencies and lacunae in the three laws, “consequent to which even the government has openly agreed to bring about as many as 18 amendments to the said laws”, he said.

“In the light of this, whatever the agriculture minister said today in Parliament is not only totally bereft of facts but is grossly objectionable,” Venugopal said.

Intervening in the debate on the Motion of Thanks to the President’s Address, Agriculture Minister Narendra Singh Tomar alleged that farmers were being misled by the Opposition and the agitation was only in one state.

Hitting out at the government, Venugopal alleged, “Driven by the sole motive of benefiting its corporate cronies and steamrolling the laws by the brute force of parliamentary arithimatical majority, the government neither consulted the opposition parties nor took any farmers organisation in confidence, before enacting the laws.”

The protesting farmers have expressed apprehension that these laws would pave the way for the dismantling of the minimum support price system, leaving them at the “mercy” of big corporations. However, the government has maintained that the new laws will bring farmers better opportunities and usher in new technologies in agriculture.