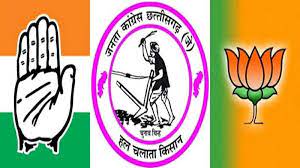 In the counting of votes for the by-election in Marwahi assembly seat of Chhattisgarh, the Congress candidate of the ruling party is ahead of its nearest Bharatiya Janata Party candidate by 3,664 votes. Officials of the state’s Chief Electoral Officer’s office told here on Tuesday that the counting of votes for the Marwahi Vidhasabha seat was started at 8 am today in the government Gurukul school.

According to the information received so far, Dr. KK Dhruv of Congress is ahead of his rival BJP candidate Gambhir Singh by 3,664 votes. Officials said that Dhruv has so far received 8,520 votes and Singh has received 4,856 votes. Counting of votes continues.

Eight candidates are in the fray for Marwahi assembly seat. But the main contest is likely to be between KK Dhruv of Congress and Dr Gambhir Singh of BJP. The Marwahi assembly seat under the Gorela-Pendra-Marwahi district is reserved for the Scheduled Tribes. Since the formation of the new state in 2000, this seat was with the Jogi family. The seat has been vacant since the death of Ajit Jogi on 29 May.

The nomination of Jogi’s son and Janata Congress Chhattisgarh (J) president Amit Jogi and his wife Richa Jogi for this by-election was canceled due to caste certificate case.