Congress, BJP spar over renaming of MP’s Hoshangabad as Narmadapuram 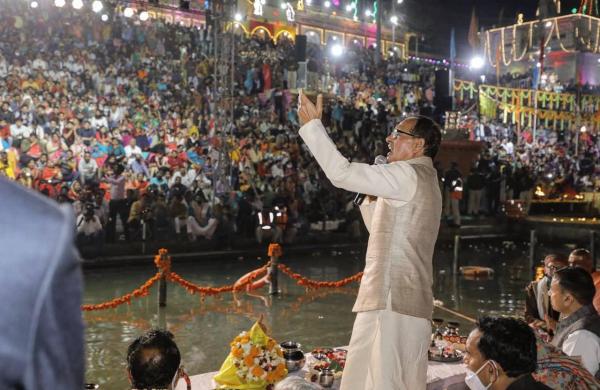 While the BJP leaders, including Vidhan Sabha Pro Tem Speaker Rameshwar Sharma and Bhopal MP Pragya Singh Thakur (who’ve been long demanding the renaming), hailed the CM’s announcement, the opposition Congress termed it as a diversionary tactic by the ruling party and the state government.

“Why doesn’t the CM talk about real issues, including petrol prices breaching the Rs 100 per liter mark, rising crime against women, and joblessness in the state. This renaming is nothing, but a political gimmick to divert public attention from the real issues and failures of the central and state government,” former CM and Congress’s Rajya Sabha member Digvijaya Singh said in Bhopal during the half-day statewide bandh call over soaring fuel prices.

Former MP minister and Congress MLA from Bhopal South West seat PC Sharma also termed the renaming issue a political gimmick to draw public attention from failures of the BJP government ahead of the urban local body polls in the state.

In Bhopal only, the Vidhan Sabha Pro Tem Speaker Rameshwar Sharma (who is the BJP MLA from Huzur seat of Bhopal district) burst crackers along with supporters over the CM proposing to rename Hoshangabad district and Narmadapuram district.

Reacting to Digvijaya Singh’s remarks, Sharma made a controversial statement, “if he (Digvijaya Singh) feels that renaming a district doesn’t make any difference, then why doesn’t he change his name to Mohd Yaqub or change Rahul Uncle (Rahul Gandhi’s) name to some Imam name, then you’ll yourself realize what difference it makes. The name signifies a lot, which is why your (Digvijaya Singh) ancestors named you Divijaya, but they would have never thought that their son who would be born as a Hindu, will wear a Muslim cap to offer namaz.”

The BJP MP from Bhopal Sadhvi Pragya Thakur also hailed the renaming of Hoshangabad to Narmadapuram.

Earlier, on Friday evening, while addressing the large gathering on the banks of river Narmada in Hoshangabad town’s Sethani Ghat, the CM had announced to propose to the central government renaming Hoshangabad to Narmadapuram.

Chouhan had recounted how in 2008, he as MP CM had sent to the Centre a proposal to rename Hoshangabad as Narmadapuram, but the then UPA government at the Centre hadn’t approved the proposal. “Owing to that I’d to remain content by naming the division as Narmadapuram Division,” he said.

“Now again, in line with your wishes, I’m sending to the Centre a unanimous proposal to rename Hoshangabad and know that it will be approved now. So stay assured now Hoshangabad will be known now as Narmadapuram,” Chouhan had announced at the grand event to mark Narmada Jayanti on Friday evening.

According to Hoshangabad-based journalist Shailendra Kourav, the demand for renaming Hoshangabad as Narmadapuram is at least three decades old. In the early 1990s, the ABVP (RSS’s student wing) had started a movement for renaming the district as Narmadapuram. Many social and voluntary organizations representing people of the district have been supporting this cause for the last three decades.

Hoshangabad town was named after Hushang Shah Gori, the first formally appointed Sultan of the Malwa Sultanate of Central India. Prior to being named Hoshangabad, it was named Narmadapur due to the river Narmada, which is considered Madhya Pradesh’s lifeline.

The BJP leaders, including Rameshwar Sharma, were campaigning for renaming as they alleged that not renaming Hoshangabad amounts to glorifying Hushang Shah Gori’s deeds of building mosques out of the remains of destroyed temples in Dhar district.