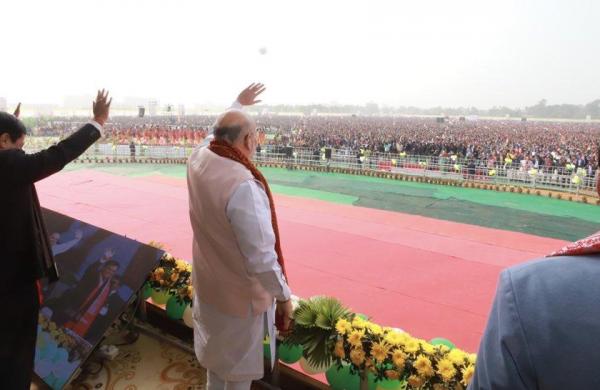 By PTI
NALBARI: Union Home Minister Amit Shah on Sunday alleged that if the Congress-AIUDF combine come to power in Assam they will open “all gates” to welcome infiltrators.

Addressing a public rally here, Shah said the Congress rule in the state gave only bloodshed, in which thousands of youths lost their lives.

“Can Congress and Badrudding Ajmal keep Assam free from infiltration? If they come to power, they will open all gates to welcome them, because it is their vote bank,” he said.

Only the BJP government led by Prime Minister Narendra Modi can protect the state from infiltration from the neighbouring country, Shah said in his first election rally in poll-bound Assam.

The Congress has formed Grand Alliance with AIUDF, CPI, CPI(M), CPI(ML) and Anchalik Gana Morcha (AGM) to fight the upcoming Assembly election, likely to be held in March-April.

Attacking the Congress, Shah said,”Congress continued the British policy of divide and rule. They created a divide between Adivasis and non-Adivasis, Assamese people and hill peoples, Bodos and non-Bodos.

“In 20 years there was only bloodshed and 10,000 Assamese youths were killed by bullets fired by the Congress.” Appealing to the people to vote for the BJP, Shah said if the party comes to power again, Assam will be “bullet-free, agitation-free and flood-free”.

Shah also slammed the Congress for its constant criticism that the BJP is a communal front and said,”Congress alleges us to be communal, but it has allied with Muslim League in Kerala and AIUDF in Assam.

“One thing is sure, Assam is not safe in the hands of Congress and AIUDF”.