Congress, AIUDF are like Mughals; need to be defeated: Tejasvi Surya in Assam 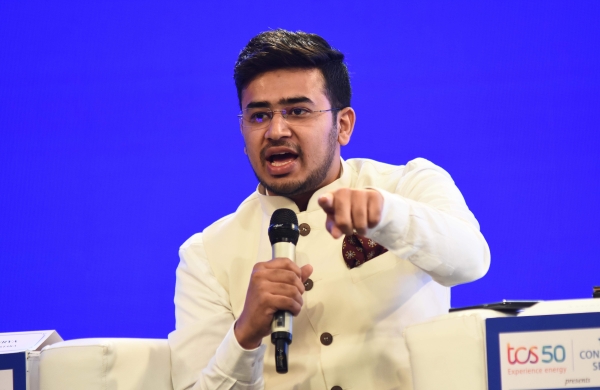 By PTI
DIBRUGARH: Likening the opposition Congress and the AIUDF to the Mughals, Bharatiya Janata Yuva Morcha (BJYM) national president Tejasvi Surya on Sunday claimed that the two parties need to be defeated in the upcoming assembly polls to save the language, culture and heritage of Assam.

The Congress has formed an alliance with Lok Sabha MP Badruddin Ajmal-led All India United Democratic Front (AIUDF) and other parties against the BJP-led coalition in the state.

“The Congress has become a follower of Badruddin Ajmal. The Congress and the AIUDF cannot save the Assamese culture. Today, the Congress or Badruddin’s party represent only the Mughals. They don’t represent us,” Surya said at a meeting of the BJYM, the youth wing of the BJP.

In the Battle of Saraighat in 1671, Ahom general Lachit Borphukan defeated the Mughal force led by Raja Ramsingh-I.

The BJP had termed the 2016 Assembly polls as the “last battle of Saraighat” to defeat the former chief minister Tarun Gogoi-led Congress government.

Surya claimed that Congress does not have any policy at this moment to protect the state’s culture, language and heritage.

Elections to the northeastern state will be conducted in three phases – on March 27, April 1 and April 6.