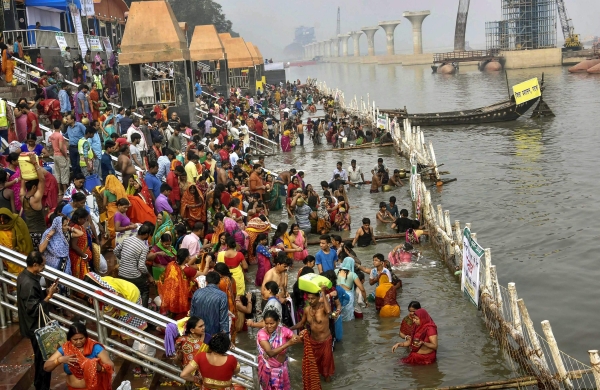 Express News Service
DEHRADUN: Chapped lips, sore throat and dimming light due to lack of water since March 7 are making 27-year-old Brahmachari Atmbodhananda from Matri Sadan of Haridwar look like a frail figure.

His body may have started to give signals to give up but his will to ‘save’ Maa Ganga remains indomitable.

“I am ready to give up my life for Maa Ganga. We, saints, cannot sit back and watch while illegal mining, dam construction and pollution destroyed Maam Ganga and other divine rivers of Devbhoomi Uttrakhand,” says Atmbodhananda.

A computer science graduate from Kerala, he had undertaken 194 days of agitation in phases earlier to save the holy river. He started his fast on February 23 and stopped consuming water on March 7.

Expressing anger at the Centre, activist Medha Patkar too tweeted about the seer.

Demands of the seer who calls his fasting till death a ‘Tapasya to save Ganga ji’ include cancellation of all hydropower projects on rivers Ganga, Mandakini, Mandakini, Pindar, Bhagirathi, Alaknanda and  Dhauliganga.

He also alleged that the district magistrate of Haridwar was sent to ‘destroy Matri Sadan’ after which seers of the Sadan have left no option but ‘Tapasya’ by which he means fasting till death.

“I have also told the PM in the letter that Sadhvi Padmavati is still in a chair for which DM Haridwar is responsible. What was her fault? She was just demanding the rights of Maa Ganga. Is this what we get for requesting ti save our rivers which are a source of our whole civilization,” said the seer.

In his 7-page letter to Prime Minister Narendra Modi dated February 17, 2021, Atmbodhananda wrote, “With the time it has been proved that the avalanche caused the flow of Rishi Ganga become violent and swept away a small hydro project on Rishi Ganga and going ahead not only destroyed Tapovan-Vishnugadh Hydro project but 200 people became prey to that made tragedy.”

The seer in his letter further says that had these projects not been constructed there would have been no casualties.

He also added that despite written assurances by officials from National Mission for Clean Ganga (NMCG) in May 2019 to stop mining and stone crushing ‘in Ganga Ji’, Uttarakhand Van Vikas Nigam has issued permissions for mining in areas of Shyampur, Chidiyapur, Bhogpur and Bishanpur.

His other demands include to ban mining in Ganga from Raiwala to Ratighati in Haridwar, remove all stone crushers within 5km of Ganga, the constitution of Ganga Bhakt Parishad, an autonomous body to control and manage Ganga affairs and bring law proposed by deceased Swami Gyan Swaroop Sanand who died in the year 2018 after fasting from June to October 2018.

The seer has also forwarded the letter to the President of India, Uttarakhand Chief Justice,  chief minister, Jal Shakti minister and district officials about his various other demand a high-level probe into the death of Professor Sanand and harassment of the ashram disciples Brahamchari Atmabodhanand and Sadhvi Padmavati.

The ashram has a list of saints and seers going on protest for their demands pertaining to Ganga.

In  2018, Sadhvi Padmavati went on fast unto death.

A bachelor of philosophy from Nalanda College in Bihar, she has been fasting since December 15, 2019 and has refused to budge despite police and administration picked her up from an ashram on January 30, Martyr Day.

Brahmachari Atmabodhanand started his agitation on January 30, 2020, when Sadhvi Padmavati was forcibly shifted to Dehradun hospital.

Afterwards, she was released the next day after medical checkups. Resuming her fast she expressed her determination.

In the year 2018, Sant Gopal Das had started a fast unto death agitation at Matri Sadan, within hours of the death of Gyan Swarup Sanand.