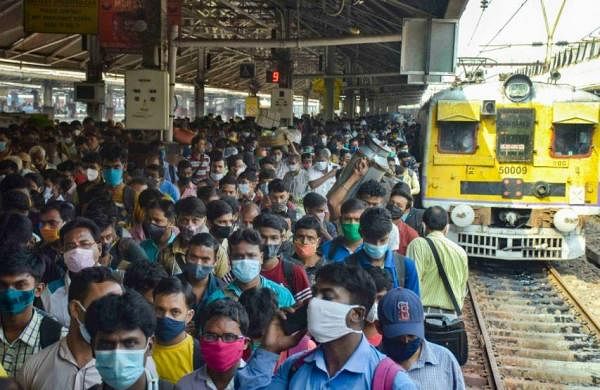 KOLKATA: On the first day of resumption of regular local train services on Monday after a nearly six-month hiatus, crammed coaches raised the fear of spread of coronavirus amid rising Covid-19 cases in West Bengal.

The state government in a recent order allowed intra-state local train movement with 50 per cent seating capacity from October 31.

Eastern Railway (ER), which carries the bulk of local and suburban passengers in its Howrah and Sealdah divisions, operated trains on Sunday as per its holiday schedule, while regular services started from Monday.

As jam-packed rakes entered Howrah and Sealdah terminal stations during the morning office hours, ER spokesperson Ekalabya Chakraborty said efforts are being made to ensure that passengers abide by the Covid-19 safety protocols including maintaining distance and wearing masks.

“We are making announcements at stations urging passengers to consciously abide by the safety guidelines,” he said.

Chakraborty said that a number of passengers have been penalised for not wearing masks at railway stations and in trains.

ER, a Kolkata-headquartered zonal railway, has decided to run more than 920 Electric Multiple Unit (EMU) trains in its Sealdah division and over 480 trains in the Howrah division from Monday.

The South Eastern Railway (SER), another zonal railway headquartered in the city, is running 48 EMU services in its Kharagpur division, an official said.

Despite strict guidelines for maintaining social distance and wearing masks, a section of passengers were seen without masks in crowded coaches.

“We have to go to work. What can we do if we have no other option but to avail crowded trains?” said Ranjan Das, who works at a trading firm in the Burrabazar area of the city.

Minakshi Bhattacharya, an employee of a private company here, said despite being afraid of contracting the infection, she was availing the local train service since it was way better than travelling by crowded buses and auto-rickshaws which also cost much more for her to commute from Baruipur in South 24 Parganas district where she lives.

“We want the number of local train services to be increased during office hours to ensure less crowding and to maintain health safety guidelines,” she said.

West Bengal has been showing an upward trend in the number of daily Covid-19 infections since the Durga Puja celebrations last month, with the bulk of the cases being reported from Kolkata and its neighbouring districts of North and South 24 Parganas, Howrah and Hooghly.

Suburban EMU and other local train services were suspended by the West Bengal government from May 7 to check the spread of coronavirus during the second phase of the pandemic.

However, ER and SER have been running staff special trains in their respective zones.