committed to protect the interests of farmers, poor and villagers: Mr. Bhupesh Baghel 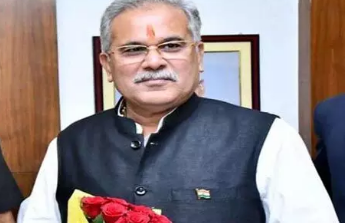 Chief Minister Shri Bhupesh Baghel today made online payment of 8 crore 02 lakh rupees in the form of fourth installment to 83 thousand 809 gopalakas and cow dung vendors in the accounts of the concerned directly through the video conferencing. This amount of the fourth installment has been made in lieu of purchase of 4 lakh one thousand 475 quintal dung purchased in 3122 Gothanas of the state from September 1 to September 15. A total of Rs 20 crore 72 lakh has been paid so far under this scheme. Maximum benefit of the scheme is being provided to the poor, landless and cow owners of the state.

Chief Minister Mr. Bhupesh Baghel said in his address on the occasion that the state government was fulfilling its promise. Protection of interests of farmers, poor and laborers is our commitment. He said that we have started many innovative schemes for the betterment of farmers and poor people of the state, besides fulfilling the promise of waiving paddy, procuring paddy, irrigation tax waiver, reduction of electricity bill. Efforts are being made to improve the economic condition of farmers and villagers through Rajiv Gandhi Kisan Yojana and Godhan Nyaya Yojana. On this occasion, the Chief Minister, while referring to the three ordinances related to agriculture by the Central Government, said that these three laws are not in the interest of farmers and common people. This will affect the livelihood of farmers, agricultural laborers as well as common people. There will be huge losses due to the introduction of hoarding, contact farming and private market.

The Chief Minister said that the government is fulfilling the promise of payment of funds to the beneficiaries in 15 days under the Godhan Nyaya Yojana. So far an amount of Rs 20 crore 72 lakh has been given in lieu of cow dung purchased in the last four fortnight. Due to this, the poor villagers and livestock farmers are getting economic benefits. The Chief Minister said that at present, thirty thousand quintal vermi compost fertilizer has been produced in Gouthans, its quantity will increase further in the coming time. Arrangements will also be made for marketing of vermi manure. He said that the goal of building Gothan in all Gram Panchayats and cow dung in all Gothanas should be arranged.