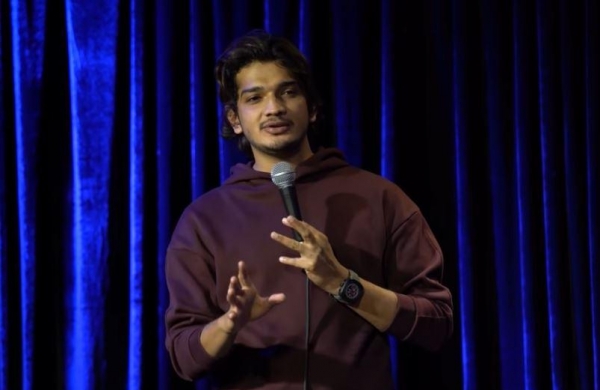 By Online Desk
In a late-night development, comedian Munawar Faruqui, who was jailed in Indore on charges of “hurting religious sentiments”, was released from Indore jail.

Deputy Superintendent of the Indore Central Jail said Faruqi was released around midnight.

he comedian was released from another door of the jail in the early hours on Sunday presumably to avoid media persons at the jail’s main gate and to ensure his safety.

Despite being granted intermit bail by the Supreme Court, the 30-year-old stand-up comedian was still kept behind bars due to a “lack of clarity” on a UP court’s production warrant.

A Prayagraj court had also issued a production warrant against Faruqui in a case of the alleged derogatory depiction of Hindu deities by him on social media. An FIR was lodged against the comedian by an advocate in April last year accusing him of mocking and insulting Hindu deities in his viral video clips on social media.

Prior to getting a stay of the case in Prayagraj, Indore Central Jail was asked to ensure the appearance of Faruqui in the Prayagraj court on February 18.

After getting bail in the Indore case, when Faruqui’s lawyers took the bail papers to jail on Saturday evening, the jail administration gave him a release in the Indore case, but did not release the comedian in the Prayagraj case, and started preparations to send him there.

The jail administration received the stay order in the Prayagraj case late on Saturday night, after which the comedian was released from jail after 12 midnight on Sunday.

On Friday, a division bench of the Supreme Court, comprising Justices Rohinton Fali Nariman and BR Gavai, had ordered Faruqui’s release on ad-interim bail in the Indore case on conditions to the satisfaction of the trial court. The apex court had also stayed the production warrant issued by the CJM-Prayagraj court.

Earlier, Congress leader P Chidambaram had questioned the delay in the release of comedian Munawar Faruqui by the Madhya Pradesh Police and jail authorities despite the order of interim bail granted by the Supreme Court yesterday.

It is nearly 30 hours since the order was passed. Yet, the order is being undermined by the MP police and jail authorities.Is all this happening with or without the knowledge of the MP Chief Minister?
— P. Chidambaram (@PChidambaram_IN) February 6, 2021

“It is nearly 30 hours since the order was passed. Yet, the order is being undermined by the MP police and jail authorities. Is all this happening with or without the knowledge of the MP Chief Minister?” he asked in a subsequent tweet.

It’s been 36 days since the Mumbai-based Muslim comedian has been lodged in the Indore Jail following the arrest of six men, including him, in a case pertaining to the alleged hurting of Hindu religious sentiments at a New Year’s Day show in Indore’s Chhappan Dukan area.

(With inputs from ANI)