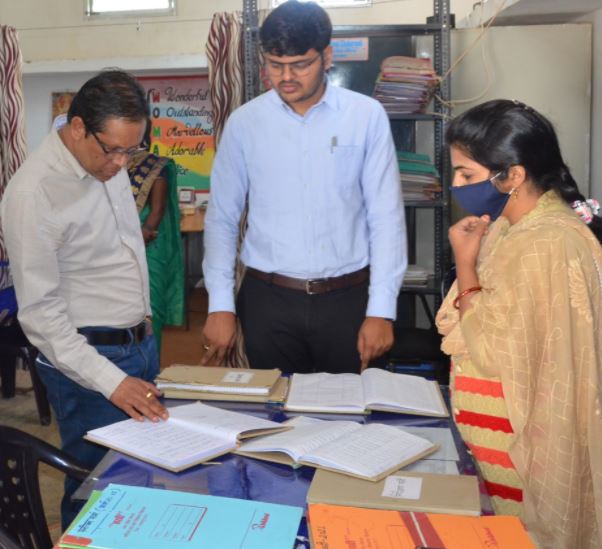 Dharmesh Kumar Sahu inspected the Sakhi forest stop center and child house run by the Women and Child Development Department at the district headquarters today. During this, Chief Executive Officer, District Panchayat Mr. Rahul Dev and District Program Officer Mr. Ravikant Dhurrev were present. During the inspection, Collector Shri Sahu took stock of the facilities and necessary arrangements being provided at Sakhi Forest Staff Center. He inquired about the number of complaints received so far and the action taken thereon and the cases disposed of and pending. The Collector emphasized on maximum dissemination of facilities being provided by Sakhi One Stop Center, so that the victimized women can get its benefits. The Center Administrator of Sakhi Forest Stop Center said that the work of providing facilities and assistance in respect of all women and girls suffering from domestic violence, girl child lying in wrong company and such activities which suffer, through Sakhi Forest Staff Center being done. Under shelter assistance, free legal aid is provided to the aggrieved women under room, food and legal assistance for the victim women.
Collector Shri Sahu inquired about the cases received and disposed of till date from establishment of Sakhi Forest Stop Center in the district. On which the Central Administration stated that since the establishment of Sakhi One Stop Center, about 616 cases have been processed by One Stop Center Sakhi. A total of 13 cases have been received in the month of January-21. Out of the cases received so far, 607 cases have been resolved. In this way, shelter assistance has been provided in 274 cases, medical assistance in 31 cases, police assistance in 82 cases and legal assistance has been provided in 50 cases. Collector Shri Sahu took detailed information about the facilities provided in the center and visited the shelter site. The Collector instructed that letters and magazines related to the government’s schemes should be kept in the center. The Center Administrator said that under counseling assistance, if a woman is suffering from assault or behavior by her husband, they are counseled and explained and medical help is provided to women. Apart from this, if a woman needs police assistance in police assistance, she is provided police assistance by coordinating with the police through One Stop Center Sakhi. He informed that Emergency Stop One Stop Center is available for 24-hour Sakhi facility. Any aggrieved woman can register her complaint at the toll free number of Sakhi One Stop Center.