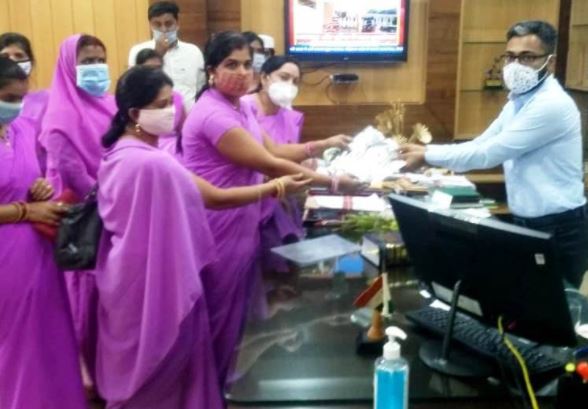 On Thursday, the women of the Sooraj Women’s Village Organization, Kopra, met the Collector Mr. Nileshkumar Kshirsagar on Thursday. During this time, other materials including agarbatti, badi-bijouri, papad, mirchi, gujiya and pickle were presented by women self-help groups. The collector appreciated the products manufactured by the groups and assured the women that the district administration would cooperate fully in making the products made by them available in the market. Collector Shri Kshirsagar congratulated and congratulated the women associated with the group for moving ahead in the direction of self-reliance by engaging in such diverse economic activities. She assured the women that a separate stall will be set up at Rajim Maghi Punni Mela for the products made under the Bihan scheme. In the coming days, a permanent stall and shop will also be arranged at the new fair site. The Chairman of the rising Suraj Women’s Village Organization Kopra, Smt. Bharti Sahu, apprised the Collector Mr. Nileshkumar Kshirsagar that a large quantity of sainted incense sticks is being made in the village Kopra by Jai Mahamaya Women’s Self-Help Group. Recently, the Agarbatti manufacturing unit was launched by the District Panchayat CEO Mr. Chandrakant Verma. He said that due to lack of marketing of incense sticks made by women, there is a problem in selling it in the open market. Keeping this in mind, if this incense sticks are purchased from women’s groups in the upcoming Rajim Maghi Punni Mela, then along with the increase in women’s livelihood, confidence will also increase. Similarly, Sister Sandhya Thakur Ladies Wear of Unnati Women Self Help Group is running the shop. Chhattisgarhi is also making dishes. Sister Lalitha Soni of Jai Mahamaya Group is training in sewing and embroidery. Dona-Pattal is also being constructed by another sister of the same group, Mrs. Meena Sahu. In this way, women are becoming financially capable and self-sufficient by joining through the group. During this time the Block President of the organization Mrs. Bharti Sahu, Village Organization Secretary Mrs. Yogita Sahu, FLCRP Mrs. Sasikala Sahu, active lady Sandhya Thakur, Matli Sahu, Roshni Sahu, Lalitha Soni, Neera Tarak, Rukhmani Sinha and DPM Patanjal Mishra of Takeshwari Tarak and Bihan were present.