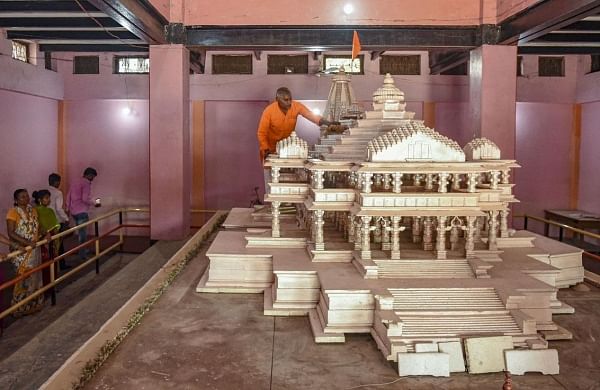 Express News Service
LUCKNOW: On the occasion of the first anniversary of the Bhoomi Pujan for the construction of Ram temple in Ayodhya, UP CM Yogi Adityanath is likely to visit the temple town on Thursday.

The CM is expected to take part in the special puja and other rituals reportedly planned by the Shree Ram Janmabhoomi Teerth Kshetra Trust. The trust members claimed that it would be a low-key affair with all Covid-19 protocols in place.

Notably, Prime Minister Narendra Modi had come down to the temple town to lay the foundation stone of the Ram temple at the Janmabhoomi premises last year on August 5.

As per state government sources, the CM, besides having the darshan of Ram Lalla, would take stock of the progress in temple construction. He would also distribute free ration to the beneficiaries of Anna Mahotsava (grain festival) in Ayodhya.

Sources in the temple town suggested that a special puja will also be organised at the spot where Prime Minister Modi had performed the bhoomi pujan last year on August 5. A special ‘havan’ and ‘kalash sthapana’ is likely to be organised by the trust members to mark the occasion.

At present, experts involved in the construction of the temple are filling a large area with concrete after the removal of debris. The process, which commenced in March, is expected to be completed by October.

The sources claimed that around 40-45 layers of concrete has to be filled to ensure the firming up of the ground where the temple is set to come up. So far, around 20 layers have been filled.