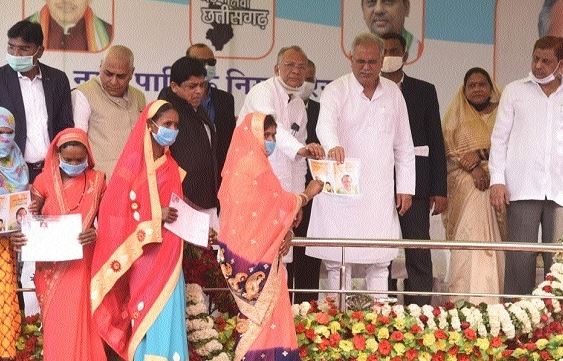 Bhupesh Baghel on Tuesday inaugurated the new temporary office of Risali Municipal Corporation (RMC) at the old school building of Bhilai Steel Plant (BSP). From this office premises, the CM inaugurated multiple projects worth 12.74 crore rupees and also laid foundation stones for projects worth 1.59 crore rupees. Speaking on the occasion, Chief Minister Bhupesh Baghel said that the development works in RMC is his Government’s top priority and he will release funds to construct hospitals, community halls, schools, and other development projects at the earliest.

He also instructed the officials of RMC to start the operation of 30 bedded government hospital in the area and also to make a blueprint for outdoor stadium. Later, Chief Minister Baghel informed that similar to the encouragement policy of Central Government, the State Government also supports and encourages farmers financially through its Rajiv Gandhi Nyay Yojana. With this financial support, Chhattisgarh has also seen a rise in the production of rice, soybean and has also started Rajiv Gandhi Kisan Nayay Yojana to give MSP to farmers so that they do not face financial hardships. He also remembered Swami Vivekananda on his birth anniversary and told that Swami Vivekananda had spent 2 years of his life in Chhattisgarh and played a vital role in the development of education in State. Later, Chief Minister distributed ‘Patta’ land ownership rights to people under Rajiv Gandhi Ashyraya Yojana and CM Abadi Patta Yojana. Earlier, Tamradhwaj Sahu, Home Minister and MLA of Durg-Rural Constituency informed that after seeing the progress of small civic bodies, he and others came up with an idea of RMC’s formation and the chief minister agreed to form Risali Municipal Corporation with immediate effect.

“At present, officials have made a blueprint of stadium, schools, hospitals, community halls, technical institutes, and other development projects with an estimated cost of 100 crore rupees and requested State Government to release funds as soon as possible.” On this occasion, Dr Shiv Kumar Dahriya, the Urban Development Minister stated that State Government has released 50 crore for doing development works in the civic body. At present, Chhattisgarh has introduced many projects such as Chief Minister Urban Health Scheme, Dai-Didi Clinic where all health staffs are women and Chief Minister Ward Office in every ward of the civic body.

In-charge Minister of Durg District and Forest Minister of Chhattisgarh, Mohammed Akbar stated that in the last two years of tenure of Chief Minister Bhupesh Baghel, farmers have received many benefits and support. He has played a vital role in the financial growth of farmers across all districts of State. District Collector Dr Sarveshwar Narendra Bhure informed about the formation of RMC on December 26, 2019 and all of the developments works took place in this short span of one year. On this occasion, Vivekanand Sinha, IG-Durg Police Range; Prashant Thakur, SP of Durg district; Dheeraj Bakliwal, Mayor of Durg Municipal Corporation, Commissioner of RMC, Prakash Kumar Sarve, Nodal Officer of RMC, Ramakant Sahu, and other officials were also present.