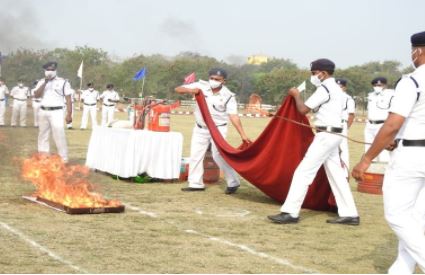 It has been decided to conduct awareness campaign to prevent incidents of arson in Raipur Railway Division of South East Central Railway. Civil Defense Inspector Koteshwar Rao along with his team gave a demo of all methods of fire fighting at the Secresa Ground WRS Colony on Republic Day. During this time, various types of fire fighting equipment were exhibited in the railway. The procedures, precautions were elaborated elaborately. Apart from this, precautions and methods of fire control were told in respect of LPG cylinders useful in households. It was performed lively.

Methods of extinguishing this fire were used by wrapping the cylinder with wet sheet, bucket, thumb and palm etc. In the end, A, B and C class fires were set and the fire was shown using instruments. Major Kamal, B.A. Ramana, Venugopal, Keshav Gupta and Rupesh Sahu were present.