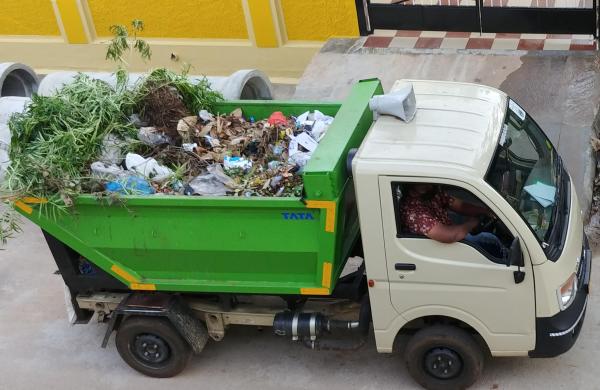 By PTI
RAISEN: Sanitary workers of a local civic body have dumped garbage outside some banks here in Madhya Pradesh over alleged delay in disbursal of loans to street vendors, officials said on Tuesday.

The garbage was dumped on Monday at the entry gates of four banks here on the alleged directives of Chief Municipal Officer of Begumganj, located about 80 km from the Raisen district headquarters, they said.

After initially accepting that the step was taken as the banks were delaying loan disbursal to street vendors, Chief Municipal Officer Dheeraj Sharma on Tuesday denied his involvement.

On Monday, when asked about the dumping of garbage, Sharma told reporters that they had sent proposals to some banks for loan disbursal to street vendors under the Pradhan Mantri SVANidhi Yojana, but the banks were “careless” about it.

“On the other hand, the collector scolds us for not achieving the target. We have been making efforts for a long time and then took this step,” Sharma said on Monday.

After a controversy erupted over the incident, Sharma, talking to PTI on Tuesday, denied his involvement and claimed the garbage was removed as soon as they received information about it.

“I was in a meeting with the district collector on Monday. I didn’t order the dumping. The garbage was removed immediately. The banks might have dumped it themselves,” Sharma claimed.

He also said banks are not clearing the proposals.

“Only one-third of 1,800 cases (of loan) were cleared. The banks are not clearing the loan disbursal proposals in the entire district,” he claimed.

The garbage was dumped outside branches of the State Bank of India (SBI), the Central Bank of India, the Madhya Pradesh Grameen Bank and the ICICI Bank in Begumganj.

SBI branch manager Pratap Singh told PTI that 333 out of 350 cases of loan for street vendors were cleared earlier.

Now, a target of 350 more cases has been given.

Of these, only 40 applicants have come to the bank for documentation, he said.

He alleged that despite the clearance of loan proposals, Begumganj municipality’s sanitary workers on Monday dumped the garbage on the directives of Chief Municipal Officer Sharma to pressurise the banks.

The Central Bank of India’s branch manager Chandra Prakash Verma said the earlier loan disbursal target has been achieved, and a new target of 500 cases have been set.

This will be completed after the applicants’ documentation, he said.

“The garbage was not only dumped at the bank’s gate, but also inside the branch,” he said.

He alleged that Chief Municipal Officer Sharma was angry over the loan cases and directed to dump the garbage.

“We complained to the district collector, who got the garbage removed,” Verma said.