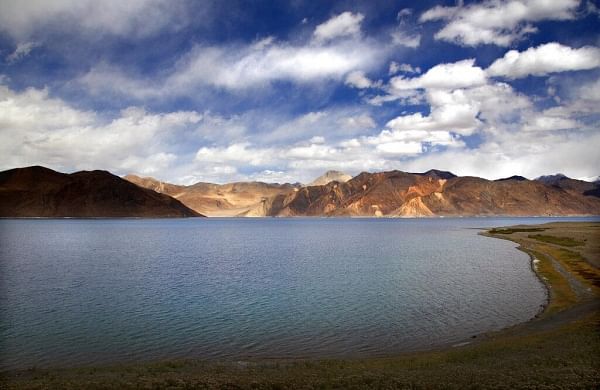 NEW DELHI: In a significant development, the Chinese have linked up the North and South Banks of the Pangong Lake in the Eastern Ladakh which has been the focal point of major standoffs between the Indian and Chinese armed forces beginning May 2020.

A source confirmed, “The construction of the bridge is going on for some time and we are well aware of it.”

It is roughly 25 km ahead of LAC on the Chinese side where the gap between the two banks of the lake is around 500 meters, the source added, and this will reduce the cross country distance, which is at present of approx 200kms, by 150 km and the 12 hours travel time will be around one-third of it.

On the North Bank, one end of the bridge is close to Khurnak Fort, and the other end will bring it closer to the Moldo Garrison which is on the South bank. The Pangong Tso is a 135 km long high altitude (around 14,300ft) lake with around 45 kilometers on the Indian side of the LAC.

As reported earlier by The New Indian Express, it was on 29th August 2020 that the Indian Army had offset the tactical balance in favour of India by occupying the Kailash Ranges which brought the Moldo Garrison of the PLA under direct observation making it militarily untenable.

TNIE broke the story that the Chinese forces clashed with the Indian Army at Finger 4 in May 2020 and mobilised their forces in standoff deployment at various points. The tensions between the two sides led to a deadly clash on 15 June 2020 in which both sides lost lives.

It was on February 11, 2021, that the two sides reached an agreement and disengagement took place on both the banks of the Pangong Lake. As per claims, Indian LAC is at Finger 8 where the Chinese troops moved back after removing all the construction done during the standoff period. The disengagement also took place at Galwan and Gogra.

The mountain spurs descending towards Pangong Lake are called Fingers and they are from 1 to 8.

Although after 13 Corps Commander level talks disengagements have taken place the overall presence of the forces in the region hangs at more than 50, 000 troops on each side along with their offensive firepower including the artillery, tanks, missiles and heavy machinery.

Both sides continue with talks at military and diplomatic levels to resolve the issues. There is a difference of perception regarding the position of the Line of Actual Control and this has led to standoff at regular intervals which have been getting resolved as per the mechanisms agreed between India and China.