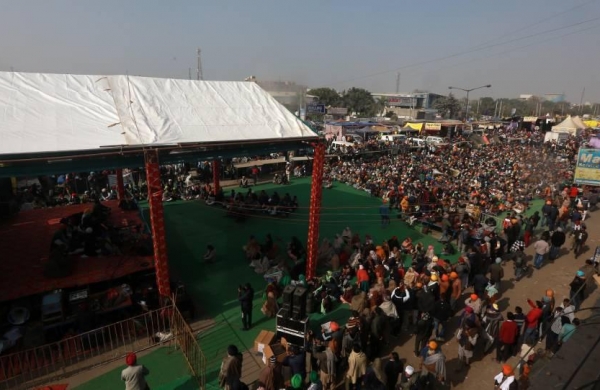 By ANI
NEW DELHI: In view of the ongoing farmers’ protest, the Delhi Traffic Police on Monday said that Chilla and Ghazipur borders will remain closed and urged commuters to take alternate routes.

“Traffic Alert: The Chilla and Ghazipur Borders are closed for traffic coming from Noida and Ghaziabad to Delhi because of farmer protests. Please take alternate route for coming to Delhi via Anand Vihar, DND, Bhopra and Loni Borders,” the Delhi Traffic Police wrote on Twitter.

The police further informed that the Tikri and Dhansa borders are closed for any traffic movement, while the Jhatikara border is open only for LMV (Cars/ Light Motor Vehicles), two-wheelers and pedestrian movement.

Meanwhile, the central government on Monday will hold a fresh round of talks with leaders of farmer unions who have been protesting at different borders of Delhi for more than a month against the recently- enacted three agricultural laws.

Farmers began their protest since November 26 against the recently enacted three farm laws — the Farmers’ Produce Trade and Commerce (Promotion and Facilitation) Act, 2020; the Farmers (Empowerment and Protection) Agreement on Price Assurance and Farm Services Act, 2020; and the Essential Commodities (Amendment) Act, 2020.