Children are cleaning the PWD Bridge, carrying garbage on bicycles 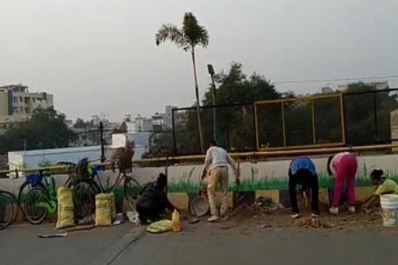 Due to lack of proper sanitation arrangements at the PWD Bridge in Amlidih, the local children here carried bicycles of garbage on the bridge and dumped it in the garbage cart below. According to the information received, these children keep doing many projects under the inspiration of a woman. One day when these children came on the bridge, they saw garbage and garbage spread here. Then, when a complaint was made to the Municipal Corporation about cleanliness through a major, the corporation ignored it and did not cooperate. From the next day, these children along with Didi do the cleaning work on seeing garbage and go to the top of the bridge, collect it in garbage sacks, carry it on a bicycle and come down and throw it in the vehicles. In this over bridge (light bridge) built by the PWD of Amlidih, the young men and women celebrate late nights and spread garbage. Some youth are also seen getting intoxicated here and passers-by are thrown into the common garbage bridge. Nevertheless, neither cleanliness nor redressal of grievances are done by the Municipal Corporation. In such a situation, these local children come in the morning and come to clean up. In such a situation, this service of these young children is commendable and a matter of pride for the city.