Child protection month started, vitamin A medicine given to children 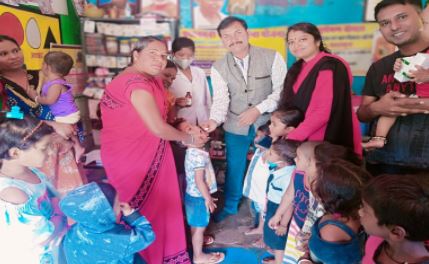 Panchsheel Nagar Ward no. Infant Protection Month was organized at the 26th Aganbadi center. During this, Councilor Manish Sharma started the program by drinking vitamin A medicine and appealed to the residents to give this medicine to all children. Aanganwadi worker Sudha Ratre informed vitamin A. He said that today iron tablets were given to children aged 6 months to 5 years and vitamin A medicines were given to children aged 9 months to 5 years. Vitamin A medicine helps to prevent anemia in children. Along with this, brain development also takes place and iron syrup removes the lack of blood in the body and helps in physical development. Simultaneous normalization was also done, in which the hemoglobin was tested for pregnant women, who had a low amount of hemoglobin in their body, were given iron calcium tablets. The event was attended by health worker Manisha Dhruv, Aganwadi worker Kirit Soni, Mitanin Sarojini Manikpuri, Phuleshwari Sahu, Sahayika Draupati Sahu, Pradeep Chandrakar, Tarakeswar Sinha, Ranjana Sinha and ward.