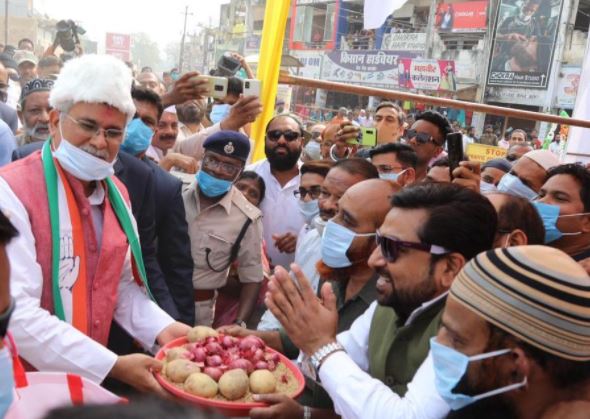 Baghel sought donations of Chherchhera Punni in the main bus shops and houses of the old bus stand of district headquarters, Kanker, in the morning today, in line with the famous folk festival Chherchhera Punni Parva tradition of Chhattisgarh. The women welcomed the Chief Minister by planting tilak and presented him rice, laddus, fruits. The Chief Minister was weighed with paddy on Chherchera festival. On this occasion, the Chief Minister congratulated all people for Chherchera festival and said that in the joy of new crop coming home, this festival of Mahadan is celebrated as Pherchera Punni Tihar on the full moon of Pausha month. The Chief Minister said that a group of children, youth, farmers, laborers and women on Chherchera Punni go door-to-door asking for donations of Chherchera Punni. The sense of equality emerges prominently in this festival. Rich and poor people go to each other’s homes to ask for donations and the paddy, money and material collected in donations are used in creative works in villages.He said that there is a feeling of tradition of Mahadaan of Chherchera that the crop produced by the farmers works not only for it but also for the needy and needy people of the society, workers and birds. The Chief Minister said that despite many challenges this year, 89 lakh metric tonnes of paddy has been procured by the state government so far. This year a new record will be made for paddy purchase. The Chief Minister and the guests, while greeting the people, proclaimed ‘Chherchera, Kothi Ke Paddy L’Herahera’. Minister in charge of Village Industries and Kanker District, Shri Guru Rudra Kumar, Industries Minister Mr. Kavasi Lakhma, Vidhan Sabha Deputy Speaker Mr. Manoj Mandavi, Parliamentary Secretaries Mr. Shishupal Sori, MLAs Mr. Mohan Markam and Mr. Santram Netam and Advisor to Chief Minister Mr. Rajesh Tiwari were also present. Were.