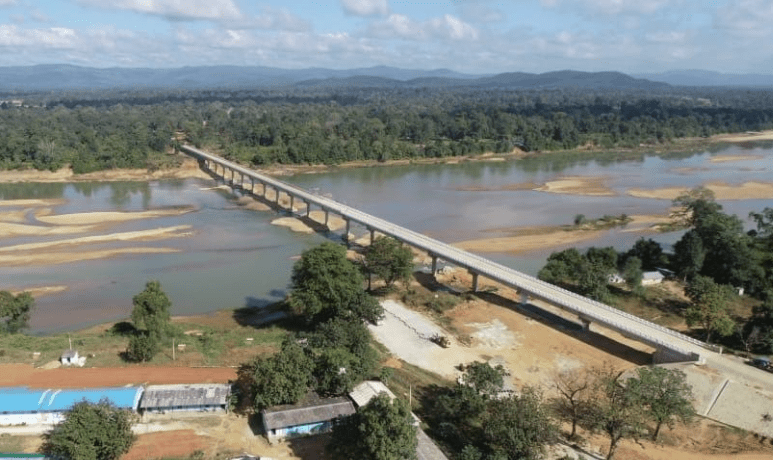 Chief Minister Bhupesh Baghel will dedicate the newly constructed bridge over Indravati river at Chhindnar in Dantewada district at a cost of Rs 38 crore 74 lakh 26 thousand to the public on January 25. The length of this newly constructed bridge is 712 meters and 8.40 meters. With the construction of this bridge, now even the raging Indravati will not be able to stop the way of the villagers of Chhindnar area. Due to the absence of a bridge, the life and traffic of many villages located across the river Indravati came to a standstill during the rainy season, due to the construction of this bridge, people have started getting the facility of all-weather traffic. The development and access to basic facilities has increased in the Naxal affected villages of Cherpal, Tumrigunda, Pahurnar, Kaurgaon and other villages across the river Indravati, due to which a new change is visible in the lives of the people. With the fulfillment of the old dream of bridge construction, there is an atmosphere of celebration and joy in the village across the river Indravati. The pace of development of villages has accelerated due to the construction of a bridge over the Indravati river. Access to infrastructure has increased. Life has become easy. It is worth mentioning that when the Indravati river was flooded during the rainy season, the villagers had to face a lot of trouble even for their daily needs. With the construction of the bridge, now the development of basic facilities in the neighboring villages has accelerated. Electricity has also reached the villages. In Tumrigunda Gram Panchayat, 100 percent households have been electrified by installing 18 transformers in 18 crossings at a cost of Rs 2 crore, benefiting 410 beneficiaries. An amount of Rs. 3 crore 91 lakh has been given to electrify the houses of all the villages situated across the river Indravati, due to which the work of electrification of Pahurnar village has been completed. Electrification work is going on in full swing in Cherpal village. Under the Jal Jeevan Mission, the work of supplying water from every household tap in the inner village has also accelerated. The district administration has gained momentum in setting up camps in the village and benefiting the villagers from government schemes. In the villages across the Indravati river, labor cards of 632 beneficiaries have been prepared, due to which they have started getting the benefits of many schemes. Access to health services has become easier. Now 108 Sanjeevani Express and 102 Mahtari Express are commuting in the village as per the requirement. Under Dr. Khubchand Baghel Ayushman Yojana, about 2829 people have been given Ayushman cards and 45 Divyangjans have been given disability certificates. People have been vaccinated to prevent Kovid-19 infection. With the construction of the bridge, there has been a positive change in the lives of the people and the distance between the government and the people has been erased to give and get the benefits of government schemes and programs. Irrigation and crop production have also increased. A total of 1656 people have started getting the benefit of ration cards in the gram panchayats located across the river Indravati. Ration is being provided from Dantewada to 356 beneficiaries of Narayanpur district, border area of ​​Dantewada district. The construction of a bridge over Indravati has accelerated the overall development and the life of the villagers has become dynamic. Like this:Like Loading… Continue Reading