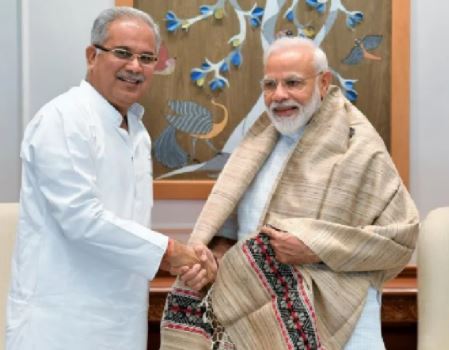 Chief Minister Bhupesh Baghel has written a letter to Prime Minister Shri Narendra Modi requesting him to allow the Center to produce ethanol from surplus paddy of the state. The Chief Minister has written in the letter that at present the sale of surplus rice available in the Food Corporation of India has been allowed to produce ethanol. In Chhattisgarh, every year paddy is purchased from farmers at a support price. After the requirement of the state’s public distribution system and rice to the Food Corporation of India, 6 lakh metric tonnes of surplus paddy is saved every year, which puts unnecessary burden on the state’s economic resources. Mr. Baghel has written in the letter that biofuels are included in the list of high priority industries in the new industrial policy of the state. Special incentive package for biofuels industries has been announced. An MoU has also been signed with four private investors to set up a bio-ethanol plant.

The Chief Minister has written in the letter that in the last 18 months, efforts have been made by the Government of Chhattisgarh to allow production of bio-ethanol from the excess paddy produced in the state towards the National Biofuels Policy, 2018 and its goal. At the April 20, 2020 meeting of the National Biofuels Coordination Committee, F.C.I. Permission has been granted to sell ethanol from surplus rice available in the country. The amount of paddy purchased at the support price in the Kharif marketing year 2018-19 and 2019-20 in the state of Chhattisgarh, after the required quantity in the state’s public distribution system in the central pool and state pool and the rice supplied to the Food Corporation of India in the central pool There was also a surplus, which caused unnecessary burden on the state’s economic resources.
Mr. Baghel has written in the letter that the role of state governments is important to attract investors in the field of bio-ethanol production. Under the New Industrial Policy of Chhattisgarh, 2019-24, bio-fuels were included in the list of high priority industries and a special incentive package (Thamechwam Chwaspabal) was announced for this. As a result, in September 2020, an agreement (Dawn) was shared with 04 private investors for setting up bio-ethanol plant in the state, which would produce more than 12 crore liters of ethanol per annum in the state from the next year, of which about 3 lakh 50 thousand. Tons of surplus paddy will be consumed. To use this production capacity, permission of the Central Government is necessary for the production of ethanol from surplus paddy.
The Chief Minister has written in the letter that under the National Biofuel Policy 2018, the National Biofuels Committee (Chhattisgarh) has been established under the chairmanship of the Minister of Petroleum and Natural Gas, through which there is a provision to allow ethanol production from surplus paddy. In the state of Chhattisgarh, if there is actual investment in a particular area like bio-ethanol under the state industrial policy,