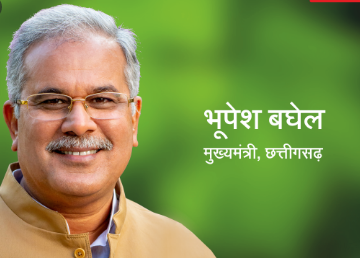 Chief Minister Mr. Bhupesh Baghel inaugurated the National Nutrition Month 2020 from his residence office today. He said that the dream of a strong and prosperous Chhattisgarh which our forefathers had seen, we are working with full force in that direction. Our goal is to create a well-developed Chhattisgarh. In view of this, from the year 2019, hot food was started to be given to children and women as a pilot project from Dantewada to eradicate malnutrition. After its immense success, Mukhyamantri Suchitran Abhiyan was launched on 2 October 2019 across the state on the occasion of Gandhiji’s 150th birth anniversary.

Chief Minister Mr. Baghel said that 37 percent children in Chhattisgarh are malnourished and 47 percent women suffer from anemia. He said that in a state where such a large number of children and women are malnourished, I understand that malnutrition is a bigger problem than Naxalites. We have to make a well-developed Chhattisgarh so that the coming generations can be healthy and prosperous. He said that along with the field staff of Women and Child Development for the Suraksha Abhiyan, we threw the power of administration. More than 60 thousand children became malnutrition free in just six months from October 2 till the fall, while 13 percent children in the state have come out of malnutrition. The Chief Minister said that Anganwadi workers and Mitanins have done a great job, His loyalty and service spirit have led to this pleasant result. He said that this campaign has to be run with full force even in the time of Corona crisis. Corona and malnutrition are two different fronts we have to fight. He said that the sisters working in our Anganwadi in the state have also distributed drought ration to the beneficiaries from house to house during the Corona period.