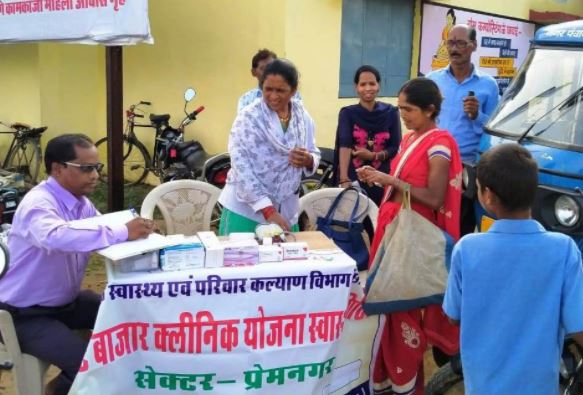 The ambitious Chief Minister’s Haat Bazar Clinic scheme was launched by the government from 02 October 2019, under which successful operation of the scheme is being conducted in 110 Haat markets of all the development blocks of Surajpur district. Mukhyamantri Haat Bazar Clinic Scheme is an ambitious scheme which has proved to be a boon for the villagers. Due to which people in rural areas started telling their problems to the doctors who came under the Chief Minister’s Haat Bazar Clinic Scheme and they are satisfied after treating the disease with medicines and counseling given by the doctor. The scheme was started in all the development blocks under Surajpur district, in which the Chief Minister’s Haat Bazaar Clinic scheme is implemented at 11 places in the development block Premnagar, 22 in Odgi, 17 in Ramanujanagar, 24 in Surajpur, 20 in Pratappur, 16 in Bhaiyathan.

In Surajpur district, under the Mukhyamantri Haat Bazar Clinic Scheme, 2337 patients suffering from fever were tested for malaria, in which 13 patients were found to be suffering from malaria, who were treated and treated successfully. In all 110 CM Haat markets under the district, 3114 people were tested for blood deficiency, including 10 patients with blood deficiency who were referred and consulted in medicines and higher institutions. The Chief Minister examined the blood pressure of 7397 beneficiaries in the Haat markets, in which 91 blood pressure patients were successfully treated and given medicines and counseling. So far 2886 beneficiaries have been screened for diabetes.