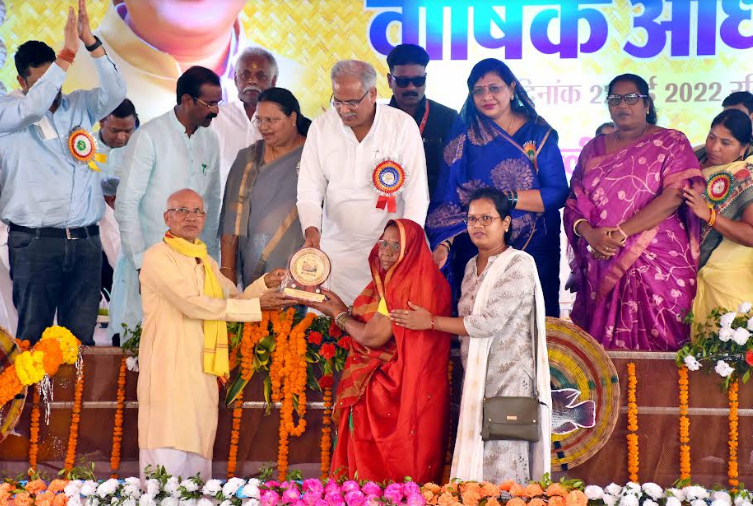 State Chief Minister Shri Bhupesh Baghel attended the annual convention of Nishad (Kenwat) society organized at village Ghotia in Daundi development block of Balod district today. The Chief Minister was enthusiastically welcomed by the Nishad Samaj with flower garlands. On this occasion, Chief Minister Shri Baghel said that Nishad society is a toiling society. Chief Minister Shri Baghel announced the opening of Mangal Bhawan and College at Ghotia on the demand of MLA of Dondilohara Assembly Constituency Smt. Anila Bhendia. On the demand of Parliamentary Secretary and Gundardehi MLA Mr. Kunwar Singh Nishad, the Chief Minister announced that Arjunda Mahavidyalaya should be renamed after Shaheed Durvasa Nishad. working for. All possible steps are being taken so that people of all societies get an opportunity to move forward. The government is working to increase the self-respect of Chhattisgarhia. Here special attention is being paid to the health, education and employment of the people by reviving the culture. The program started with the worship of the presiding deity of Nishad Samaj, Bhaktaguha Nishad and Shri Ram Chandra ji. Referring to Bhaktaguha Nishad, the Chief Minister said that Bhaktaguha Nishad used to reside in the heart of God because of his gentle and simple nature. Lord Shri Ram gave place to Nishad Samaj in his heart. The Chief Minister said that Chhattisgarh Government is continuously working for the upliftment of Nishad society. From education, employment to traditional fisheries business of the society, loans are being given at zero percent interest. Electricity facilities are also being provided to the fish farmers like farmers. Women and Child Development Minister Smt. Anila Bhendia called upon the Nishad community to come forward to benefit from the schemes of the government. Parliamentary Secretary Shri Kunwar Singh Nishad thanked the Chief Minister for giving agriculture status to fisheries and for the efforts being made for the upliftment of the people of the society. The President of the Fishermen Welfare Board, Mr. MR Nishad also addressed the convention. The Chief Minister honored the families of Martyr Durvasa Nishad and Martyr Narad Nishad by presenting mementoes. On this occasion, Minister in-charge of the district Mr. Umesh Patel, Sanjari-Balod MLA Mrs. Sangeeta Sinha, District Panchayat President Mrs. Sonadevi Deshlahara and other people’s representatives of the area, many senior officials of Nishad Samaj, distinguished citizens, Collector Mr. Janmejay Mahobe, Superintendent of Police Mr. Govardhan Ram Thakur and a large number of people were present. Like this:Like Loading… Continue Reading