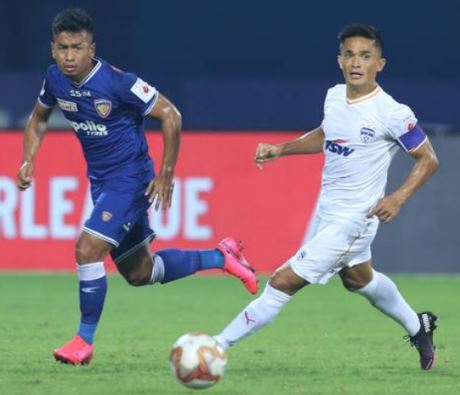 I asked him during the game and he said he twisted his ankle. Him not playing majority of the game helped us but I am fond of him and I hope nothing major has happened to him because he is very important for the country. I think I am doing allright. I need to work a lot. Not getting the win in first two games played in my head and my teammates as well. Hopefully, in the next few games we will improve a lot in attack.”

“I think if we lose 1-0 it’s always painful. I can tell you guys, last 35 minutes we tried to score the goal. It was a clear penalty but referee didn’t see it. I criticised players internally because we made some stupid mistakes before the goal. we need to work. Tactically we could have been better in the first half. We learn from it. [On progress made so far] I have had good games and bad games in my career when it comes to refereeing. I feel sorry for the players. Ashique made 3 hard fouls on Thapa, who is one of the best players in India, so the referees needed to protect him. We had to take him out. I have to make a big compliment of my team because of the tactical change of three at the back in the end. We have to accept this defeat. I am angry about myself sometimes because I had to make some changes before.”

“[On chances from open play] Yea, we are improving the pattern ofplay. Still the last pass is not happening. We had some good chances for the last pass to get 2-0. We were suffering at the end because of that. [On Suresh] He has done a good job. When he signed for the club last season, he had some mistakes, taking too much time on the ball deciding when to pass. He is a clever player. He does a lot for the team.”