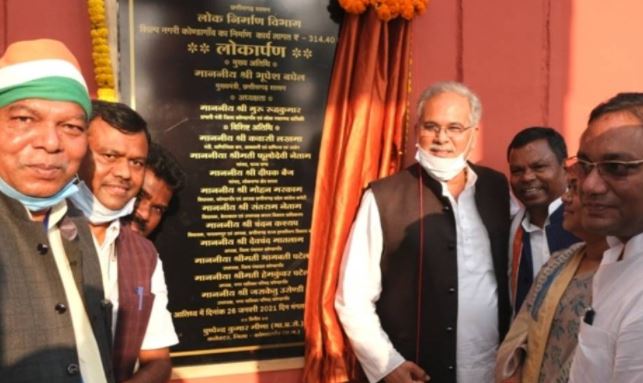 Bhupesh Baghel during the two-day visit to Kondagaon today inaugurated a craft city built at a cost of about 03 crore 14 lakh as the new identity of the district. On this occasion, the Chief Minister congratulated Republic Day and said that the rich art and culture of Chhattisgarh is our own identity. All artists incorporate hidden expression into their art through their artworks. Our culture is thousands of years old. Through craftsmanship, our identity has been established in the country and abroad.

Chief Minister Baghel said that it has been the endeavor of the state government, how to identify all the cultural heritage which are settled in the life of the people in the area. Bastar was identified as Dussehra Festival, Danteshwari Mai, Belmetal artifacts, thrilling Rooster market and Ghotul, a center for tribal education. Today Bastar has carved an international reputation for education, sports, arts and its tourism destinations.

Chief Minister Bhupesh Baghel spoke about the gradual development of art in the museum and exhibitions in front of the general public during the observation of Shilpanagari. This will increase the interest of people towards art, telling the process from the beginning of craft artifacts to the final stage, will provide a fair remuneration for the creation and products of the artists.

On this occasion, he sympathetically reviewed the demands of the craftsmen and assured them to take necessary initiatives at the state level. During the program, Chief Minister Bhupesh Baghel was welcomed by the craftsmen in accordance with the tradition and presented mementos.