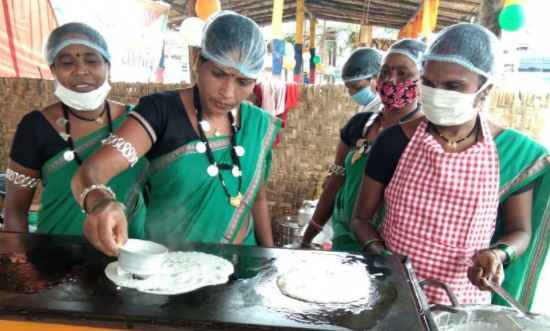 Gadkaleva has been started by the new government in every district of Chhattisgarh on the lines of Indian Coffee House. Not only the traditional cuisine of Chhattisgarh is available in Garhkaleva but there is also preparation to keep all the products of Devbhog. It has been established as a new brand due to the continuous encouragement of the Gadhakaleva by the state government. Traditional dishes from these centers will soon be served to the guests of the state and visitors from outside. Traditional dishes of Chhattisgarh are also being served in Chhattisgarh Bhawan in New Delhi.
As per the intention of Chief Minister Mr. Bhupesh Baghel, folk art and culture of Chhattisgarh is being promoted. In order to give a new look to Garhkaleva, a series of bamboo craft furniture have been released by the Handicrafts Development Board to make these centers attractive and in line with the Chhattisgarhi tradition. Due to the traditional surroundings and decoration of Chhattisgarh, the attraction of these centers starting in the districts has increased. Chhattisgarhi catering and cuisine sales center operates in the Mahant Ghasidas Memorial Museum Complex of Raipur. It has lived up to the quality and standards, competing with other food and drink centers in Raipur city, giving a boost to traditional and healthy, delicious food. The culture of Chhattisgarh has distinct and rare traditions of food, Which unfolds in every Prahar, Bella, Weather and Teej festival. The horseshoe of the forest-tribal society is mainly based on natural forest produce, so the horseshoe of district culture has interesting juicy variety. Mangalik and Garamangalik have a vast range of cuisines of both contexts. These dishes are roasted, steamed, fried in oil and they are prepared without all three. Some of the main dishes of Chhattisgarh include Chila, Besan Chila, Gurha Chila, Fara, Muthiya, Dhuska, Chanur Roti, Chanur Patar Roti, Khupri Roti, Buffauri, Chansela, Bara, Patal Chutney, Deharuri, Airesa, Dudhfra, Pakwa, Typical, Khurmi , Bidiya, Pidiya, Papachi, Puran Ladoo, Curry Ladoo, Bundi Ladoo, Murra Ladoo, Lai Ladoo.
It was decided by the state government to start Chhattisgarhi Food and Cuisine Sales Center in all district headquarters of Garhkaleva Chhattisgarh in the financial year 2020-21 and under it, by training local women self-help groups and preparing places, sheds etc. for Gadhkaleva Will be given for operation. So that the poor families of the group can get self-employment for living and become self dependent. The Chhattisgarhi Cultural Program and Chhattisgarh Cuisine Stall was set up in Ahmedabad, Gujarat from 6th to 14th January 2019 under the Government of India scheme ‘Ek Bharat Shreshtha Bharat’.