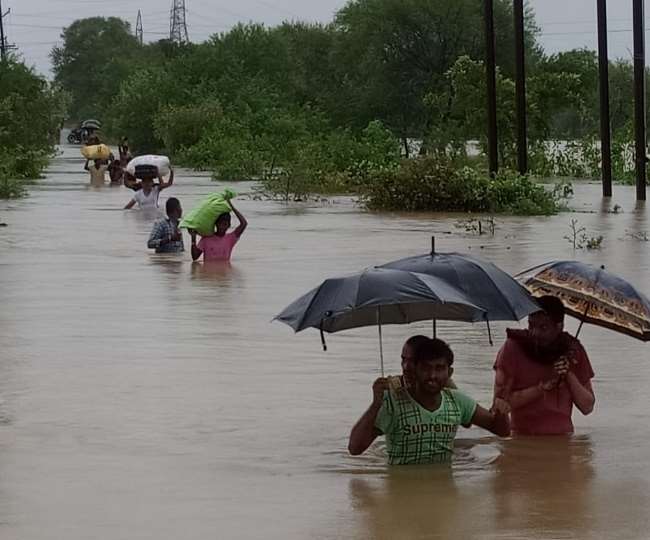 Raipur: Due to the effect of active cyclonic pressure in the Bay of Bengal, Chhattisgarh has been raining continuously for the last three days. Pictures from the satellite have revealed that the central and south Chhattisgarh are completely cloudy in the sky. This region is now moving rapidly towards Madhya Pradesh and Curve towards Jharkhand. The Meteorological Department has issued a yellow alert for 19 districts of the state during the next 24 hours. Orange alert has been issued in five districts. Apart from this, a red alert has been issued in 15 districts of the state.

Rivers on the rise

Most of the rivers in the state are in spate due to heavy rains and in many places national highways have also been completely closed. The state has received 530 mm rainfall during the last 24 hours. Mahanadi is in spate due to rains for two consecutive days in Bilaspur division due to which there is flood situation in many villages in the coastal areas. Bilaspur has received 137 mm of rainfall during the last 24 hours. So far this year, Bilaspur has received a total of 1140 mm of rainfall, which is more than the average annual rainfall. The water from the Lilagar river has entered the homes of the people.

Due to the continuous rains in Janjgir for the last 20 hours, the Lilagar river is in spate and the water of the river has entered the homes of the people. Villagers are evacuating their houses with their essentials and cattle and reaching safe places. Due to the incessant rains many trees have been razed due to which the electricity system in the city has come to a standstill for the last 12 hours. Many rural areas of the division are completely flooded. People have to evacuate their homes and take shelter in safe places. It is still raining in most areas in the division.

The water level of Mahanadi is continuously increasing in Shivrinarayan due to the continuous rains for several days. The Hasdev river has also become abundant. The Kanji Nallah, built between Ringney Kukda on Semra Salkhan Marg, has also been drowned, causing traffic on this route to stop. Here, the administration has issued an alert for people residing in the low lying areas along the river and has imposed the duty of home guard jawan and diver in Shivrinarayan and Chandrapur. People living in kutcha houses in villages along the banks of Mahanadi are going through a bad phase of life.

Due to the low pressure of air from the Bay of Bengal and the Arabian Sea, there are strong winds from the east direction due to moving in the north direction. Surguja division is witnessing strong winds in the upper areas after rains for three consecutive days. Paddy, maize and sugarcane crops have been damaged due to the movement of winds at division headquarters Ambikapur at a speed of about 20 to 30 km per hour in the morning. The crops in the fields have leaned to one side. Bending of crops has led to its rotting problem.