Chhattisgarh Veerni Awards To Be Held on 21st March 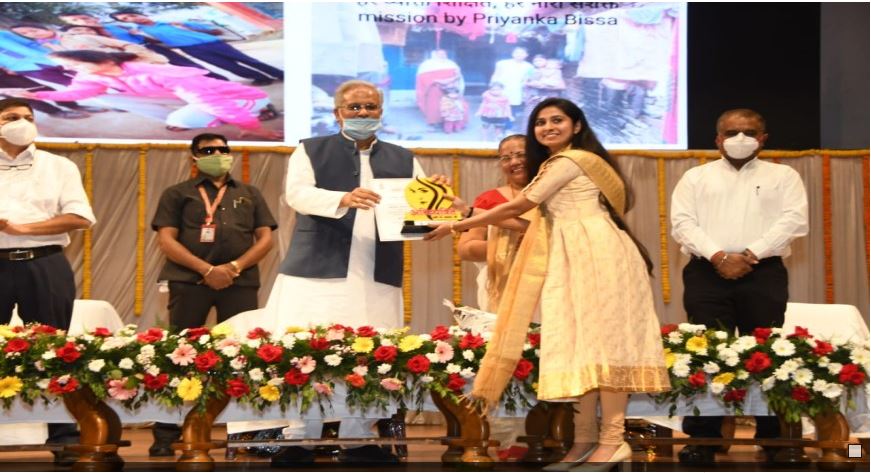 Chhattisgarh Government organized a state-level women’s conference to share a roadmap for various women centric initiatives the government has planned this year and also gave a detailed update on ongoing projects. The government has also announced the Chhattisgarh Veerni Awards to recognize and honour the contributions of women in Chhattisgarh, and across India.

The Chhattisgarh Veerni Awards will be given to women who have set examples in the state of Chhattisgarh, and across the country, by becoming leaders in their chosen field, hopefully inspiring other female achievers. The winners will be announced on 21st March .

On issues related to women, the Chhattisgarh Government plans to work through the year, and later, on various programmes covering areas like: employability and employment; equal rights; associating women with self-help groups; security; proper sanitization in schools; installation of sanitary pad machines, and restoration where it has stopped working; pension for old women; Day Care for children of working women near their workplace; special skill development schools for women; special help desks for women at police stations.

Chief Minister Mr. Bhupesh Baghel said “The Chhattisgarh government renews and strengthens its pledge to make Chhattisgarh a state where women are free, empowered, included and celebrated – not just on important days like International Women’s Day, but on every single day of every single year. Our government has implemented various programs and policies focused on the empowerment of women: through education, resources and rights. But, besides these programs and policies meant for women, we also keep, and will continue to keep, women’s’ interests foremost in our minds while making policies in any and every sector. This is important not just for the women in Chhattisgarh, but for the economy, society, families and culture of the state as a whole – to grow, and to achieve unimaginable heights.

As a marker of this belief and pledge, and our efforts to this end, we are proud to announce the “Chhattisgarh Veerni Awards” to recognize and honour the great contributions made to society, by remarkably brave women, in Chhattisgarh, as well as across India.”

The State Government is also conducting several schemes to provide better nutrition and health facilities to women. Twenty thousand women suffering from anemia have regained their health due to the Chief Minister’s Nutrition Campaign (Mukhyamantri Suposhan Abhiyan). Through this campaign, ninety-nine thousand children have been cured of malnutrition in one year. Women are also getting the benefit of health services through Mukhyamantri Haat-Bazaar Clinic Scheme, Urban Slum Health Scheme and Dai-Didi Clinic Scheme. Under the Dai-Didi clinic scheme, the entire staff including the doctor is female, so that women are comfortable in discussing their health related problems.

20 lakh women have been provided employment and income resources by associating them with self-help groups. Other than making vermicompost, women are conducting various economic activities in Gauthans and are also earning from the collection of minor forest produce. Earlier, only 7 types of minor forest produce were purchased on support price. Now their number has been increased to 52, which has contributed to an increase in the income of women. Women are also operating various cottage industries such as broom making, lac, kodo-kutki processing, and honey production. Rural women have started a readymade garment factory in Dantewada under the brand DENEX. Women from Naxalite-affected areas are also working in this factory, after completing their training in tailoring. All the municipal corporations will soon have a well-equipped pink room for women, where women will be able to breastfeed their children.

Mr. Baghel said that any citizen, including women, can avail police assistance in an emergency by dialing 112, but now a separate dial service number will be issued for women, so that the police may immediately attend to the emergency call for help on this number.