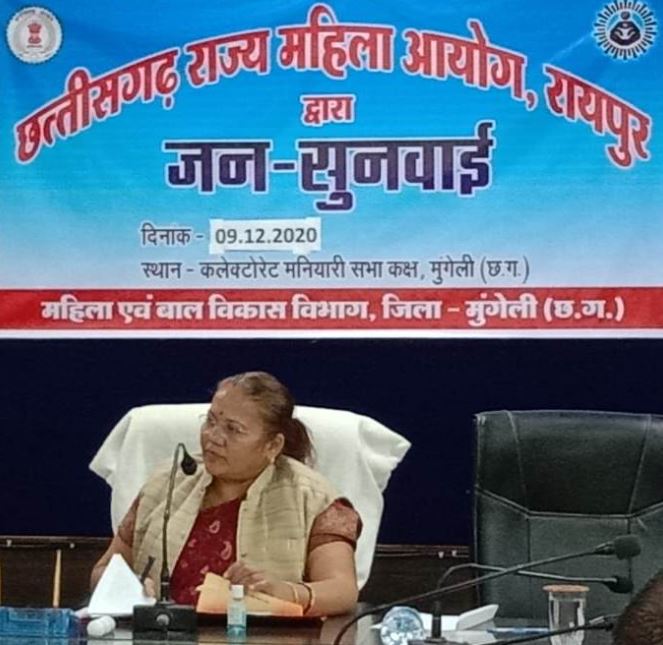 Chhattisgarh State Women’s Commission Chairperson Smt Kiranmayi Nayak held a public hearing on 11 cases related to harassment of women at the Maniyari meeting hall of District Collectorate Mungeli on Wednesday. During this time 8 cases were adjourned after hearing the parties.
Mrs. Nayak instructed to appoint women members in the District Family Committee, stating that it is mandatory to have fifty percent members of women in the district level family committee. In one of the cases before the Commission, Mrs. Nayak took seriously the assault and indecent behavior from the applicant and directed to file a First Information Report (FRI) against the culprits. Similarly, he also listened carefully to the case of the then councilor of Nagar Panchayat Lormi getting his relative to get a job and after examining the documents and after examining the case of the appointment, to submit the investigation report within two months. Instructed the Chief Executive Officer.
Smt. Nayak misused the position by former sarpanch and secretary of Gram Panchayat Baghani Bhanwar and heard the payment of one lakh seventy nine thousand rupees without digital signatures of the applicant sarpanch without his knowledge and after the acceptance of the non-secretary, the seriousness of the case increased Said to go. He instructed the Chief Executive Officer of Janpad Panchayat to send the detailed inquiry report on Sarpanch’s application to the Commission within two months. The public hearing followed the necessary guidelines to prevent corona infection. During this, District Panchayat President Mrs. Lekhani Sonu Chandrakar, Advocate Ms. Shamim Rehman, Public Prosecutor Mr. Manish Choubey, Public Representatives and departmental officers and employees were present.