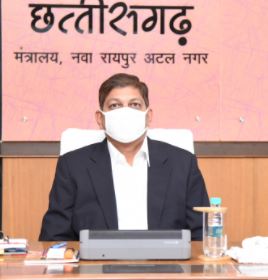 The ninth session (winter session) of the fifth assembly of Chhattisgarh will be held from 21 to 30 December 2020. Regarding preparations before the session, Chief Secretary Shri Amitabh Jain discussed with Additional Chief Secretary, Principal Secretary, Special Secretary (Independent Charge) of all the departments of the government through video conferencing. During the session, Shri Jain has given instructions to constitute Assembly Cell in departments and appoint Nodal Officer. He has said that the official law work (Bill) should be made available to the Assembly Secretariat seven days before the scheduled and all necessary preparations should be made for discussion in relation to the Bills. He has directed to make available to the Legislative Assembly the reply of pending assurances before the commencement of the session. Letters, reports, literature etc. to be laid on the table of the assembly have been asked to make available to the assembly within the time-limit. The Chief Secretary has given instructions for adjournment motion, calling attention notice, petitions, void notice, assurances, resolutions, answers to incomplete questions, prompt action on the reports of various committees of the assembly. He said that during the session, leave of subordinate officers and employees should not be sanctioned except for unavoidable reasons. Proposals outside the state should not be made unless necessary during the session. During the session, Shri Jain has given instructions for compulsory presence of departmental officers in the official gallery of the assembly. He has said that the latest information about the action taken by the departments on the Public Declaration 2018 should be prepared and information should be made available in the Legislative Assembly if necessary. Instructions have also been given by Shri Jain to prepare for immediate discussion on subjects of public importance. During the meeting, Secretary of Parliamentary Affairs Shri Sonamani Bora and Secretary of General Administration Department Shri D.D. Singh was also present.