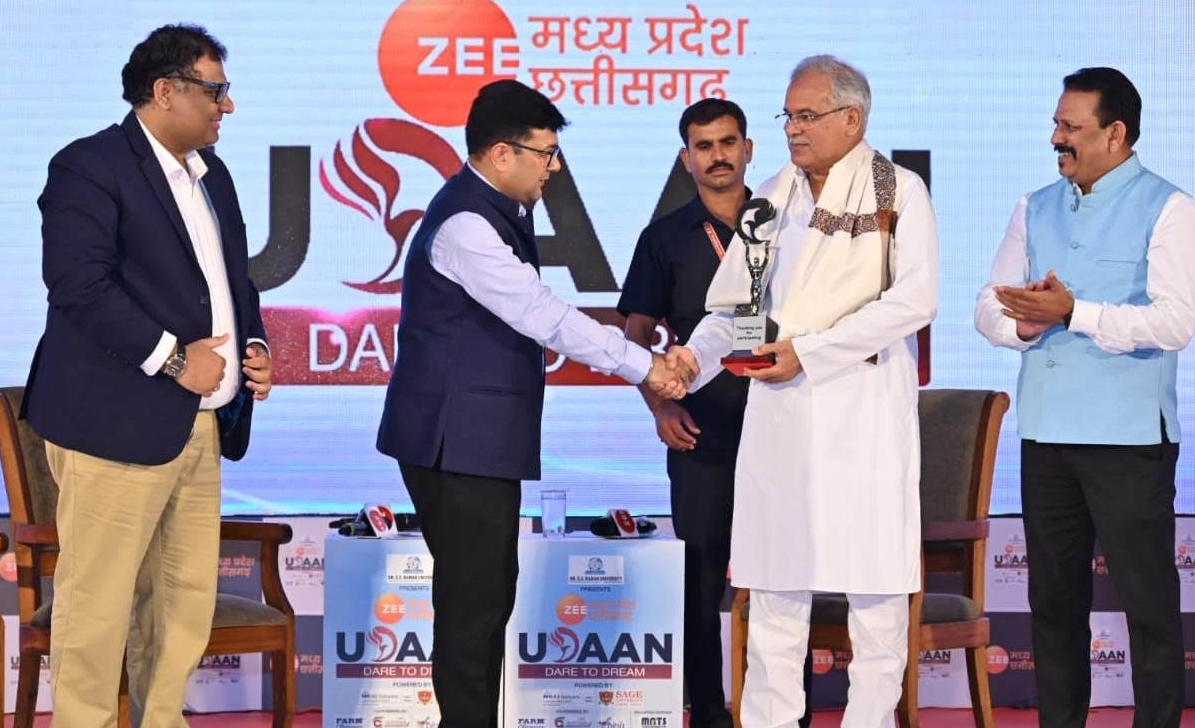 Chief Minister Shri Bhupesh Baghel arrived at a program ‘Udaan – Dare to Dream’ organized by Zee Media Group at a private hotel in the capital here this evening. Chief Minister Shri Bhupesh Baghel took part in the discussion here. During this, in response to the questions, he said that Chhattisgarh is progressing continuously in the direction of development. Here schemes are being implemented well in the interest of every section and people. As a result of which money has started coming in the pockets of the people and prosperity and prosperity have started appearing in them. Chief Minister Shri Baghel said that the important programs being run in Chhattisgarh using innovation in public interest should be discussed in other states and also in the country. has been Our main goal is to increase the income of the people. Keeping this in mind, the schemes are being implemented in a better way. Through this, farmers, laborers, youth and women and tribals etc. have started getting ample opportunities to move forward in the state. During this, Chief Minister Shri Baghel also apprised about the four symbols of Chhattisgarh namely Narva, Garwa, Ghurva, Bari, Rajiv Gandhi Kisan Nyay Yojana, Godhan Nyay Yojana, Rajiv Gandhi Grameen Bhumiless Krishi Mazdoor Nyay Yojana etc. Employment to the people in the state. Along with this, it is also being linked with livelihood activities. He said that we are not only doing the purchase of minor forest produce at support price in Vananchal, but the work of their value addition is also being done. At the same time, a chain of C-Mart is being prepared, where markets are being made available for various rural products. Mahua, which was sold in Bastar for Rs 30-40, is now going to England and the same Mahua is being sold there for Rs 116. Due to which collectors are getting more economic benefits. During the meeting so far, I have seen that confidence has come in women. On the question about different addresses, Chief Minister Mr. Baghel said that people feel personally connected to me, so they call me by different addresses. . On the question about the success of meeting-meeting campaign in the discussion, the Chief Minister said that through meeting-meeting campaign direct communication is being held with the general public. Efforts are being made to know whether the benefits of government schemes are reaching them or not. People are satisfied that they are able to speak directly to their chief and express their problems and needs. During the meeting, I am having food at the homes of the villagers. During this, I saw that there is medicine in his food. On the question about Mahatma Gandhi’s village Suraj at the center of the state government’s schemes, the Chief Minister said, Gandhiji had said that India lives in villages. The biggest loss is due to intellectual migration from the village. We worked for the self-reliance of the villages. Gave economic prosperity to the farmers. The laborers and forest dwellers also got financial benefits. On the reason behind the low unemployment rate in Chhattisgarh, he said that after our government came, we worked to promote the agriculture sector. People’s interest in agriculture increased. We gave maximum input subsidy with support price. On the other hand, continue the work of MNREGA. We also gave jobs in many sectors. On the other hand, regarding the changing Bastar, the Chief Minister said that the Naxalites did the work of exploiting the villagers by confusing them. Our government returned the land of tribals in Lohandiguda. With his plans, the villagers of Bastar instilled confidence in the government. We have worked for health, education and employment in Bastar. We assured the villagers of Bastar that development work is for them. We did many such works which were not included in the manifesto. Like this:Like Loading… Continue Reading