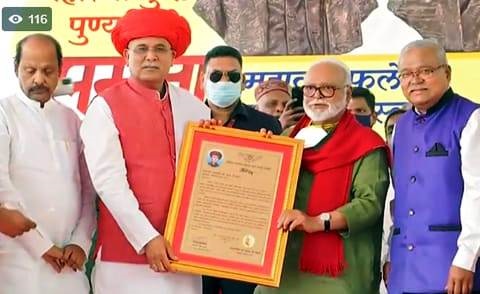 Chhattisgarh Chief Minister Shri Bhupesh Baghel honored with ‘Mahatma Phule Samta Puraskar’ ‘ has been awarded. In a function organized by All India Mahatma Phule Samta Parishad at Mahatma Phule Memorial ‘Samta Bhoomi’, Pune, National President of the council, Mr. Chhagan Bhujbal honored him with ‘Mahatma Phule Samta Puraskar’ by providing Phule turban, honorary shawl, samman nidhi and memento. . The Chief Minister of Chhattisgarh, Shri Bhupesh Baghel has been selected for this year’s ‘Mahatma Phule Samta Puraskar’ for his exceptionally important work and decisions taken towards providing justice to the deprived sections of the society during his tenure. A copy of Mahatma Jyotiba Phule’s book ‘Kisan Ka Koda’ was presented to the Chief Minister in the program. Earlier, the Chief Minister paid homage to the statues of Mahatma Phule and Smt. Savitri Bai Phule by garlanding them at Mahatma Phule Memorial ‘Samta Bhoomi’. Chief Minister, Shri Baghel while paying homage to Mahatma Jyotiba Phule and Smt. Savitri Bai Phule at the ‘Mahatma Phule Samta Puraskar’ distribution function said that Mahatma Phule and Smt. Savitri Bai Phule worked throughout their lives for the underprivileged, the downtrodden, the oppressed and the downtrodden of the society. He showed them the way of life and brought them respect in the society. The life of Mahatma Phule was the life of a fervent revolutionary. He looked closely at the problems of his time, understood and found their solution. He directly attacked the stereotypes prevailing in the society, while working to solve the problems of education, medicine and equality of that time, made an important contribution towards building an egalitarian society. He said that this land is the land of many saints including Mahatma Jyotiba Phule, Babasaheb Bhimrao Ambedkar and the land of ideological revolution. The Chief Minister said that there was a time when India used to have 23 percent of the GDP of the whole world. In the history of five thousand years of India, three and a half thousand years were ruled by backwards. The people cultivated agriculture, and skilled craftsmen and artisans did crafts and crafts. In ancient times, the business of India flourished in the world, hence India was called the golden bird. This situation remained even during the Mughal period, but during the rule of the British, the economy of the country was shattered. Farming started getting destroyed, skilled people did not have work. In such a situation, a light emerged in the form of Mahatma Jyotiba Phule. Who worked for the establishment of an egalitarian society through social reform. Gave respect to the downtrodden, despised and emphasized on education. Special emphasis was placed on the education of women. He said that without knowledge there is no knowledge, without knowledge there is no policy, without policy there is no movement and without speed there is no meaning. He founded the Satyashodhak Samaj. He said that Mahatma Phule was the leading leader of the social revolution, while the Father of the Nation Mahatma Gandhi was the leading social reformer of the political revolution. Mahatma Gandhi laid emphasis on cottage industries to make people financially capable. The spinning wheel and spindle were made weapons. The Chief Minister said that Bapu carried forward the work of Mahatma Phule. He worked to advance the productive society of the society. Shri Baghel, while paying tribute to the architect of the Constitution of India, Babasaheb Dr. Bhimrao Ambedkar, said that he gave us the right of equality, equality through the Constitution. Referring to today’s circumstances, he said that today our constitution and institutions are in danger. There is a need to save them. He described the use of goods produced by small artisans as necessary to fight capitalism and marketism in today’s conditions. The Chief Minister said that today the Scheduled Castes and Scheduled Tribes are getting less reservation in proportion to their population. But everyone is silent on this matter. He informed that quantifiable data is being collected by the state government to provide 27 percent reservation to other backward classes in Chhattisgarh. Which will be presented in the High Court very soon. He said that it is our endeavor that they can get as much as they deserve. Mr. Baghel said that after the formation of the new government, 4200 acres of land which had been authorized from 1700 farmers for setting up a steel plant at Lohandiguda in Bastar were returned to them. Started giving input subsidy to farmers under Rajiv Gandhi Kisan Nyay Yojana with purchase on support price to get the farmers the right price for their produce. Referring to the Godhan Nyay Yojana, he said that in this scheme, by purchasing cow dung at Rs. 2 a kg, self-help groups are producing organic manure in which thousands of women have got employment. Now along with organic manure we are also making electricity from cow dung. He said that by producing vermi manure in Chhattisgarh, we are moving towards organic farming. Recharging of 12000 drains is being done to stop rain water. On this occasion, the chairperson of Maharashtra Women’s Commission, Mrs. Rupali Tai, Mr. Bapu Bhujbal, Hari Narke, Mr. Siddharth Kushwaha and many office bearers of All India Mahatma Phule Samta Parishad, public representatives and enlightened citizens were present. Like this:Like Loading… Continue Reading 1 min read 1 min read 1 min read