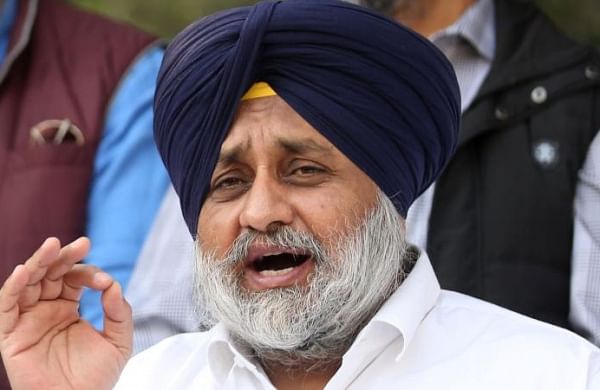 The Shiromani Akali Dal (SAD) president told media persons here that the Channi government should take action against the culprits and not play politics over the issue.

Badal claimed that he was not getting either defensive or apprehensive over the issue but found the statements of Channi and Punjab Congress chief Navjot Singh Sidhu on the issue amusing.

“I don’t care if they frame us, but I warn them that it is a sin and crime to frame anybody in a false case,” he remarked.

The SAD supremo warned the Congress government and Punjab’s Director General of Police with legal action if false witnesses were arranged to frame the Badals.

“Reliable sources have told me that the DGP and his team have been instructed to prepare a clear plan for a false witness and record his/her statement under Section 164 CrPc for involving the name of the Badal family in the case,” the SAD chief claimed declining to make public the name of the source.

“The ruling Congress leaders have been crying hoarse during the last four-and-a-half-years over the matter and have made two attempts to frame the Badals, he said, adding that it was now their third attempt to implicate the family. Earlier, (former IPS officer and AAP leader) Kunwar Vijay Partap Singh has made every bid to frame us but the high court rejected his report as politically motivated,” he alleged.

He had taken premature retirement in April after the Punjab and Haryana High Court quashed a report filed by the earlier Punjab Police SIT into the Kotkapura firing incident after the alleged desecration of the Guru Granth Sahib in Faridkot district.

He joined the Aam Aadmi Party in June.

Badal was the deputy chief minister and holding the home portfolio when incidents of desecration of religious texts and the subsequent police firing at people protesting against it had taken place in Faridkot.

The SAD chief claimed that Channi and his deputy were now attending five-member SIT meetings and violating high court directives for conducting an independent probe into the sacrilege case.

Regretting that the sacrilege incident occurred during the previous Akali-led government, Badal invoked God to wipe out those who were responsible for the act as well those who are doing politics over it.

Punjabis and Panth wanted culprits to be behind bars and not politics over the issue, he said.

Reminding the Congress government that they have come to power over two major issues  promising to punish those responsible for sacrilege and curbing drugs menace, he alleged that it has failed miserably to solve both.

“They (Congress) are after the Badal family because they want to divert public attention from their total failure as a government as well as to cover up the war between Channi, Navjot Sidhu and (deputy chief minister) Sukhjinder Randhawa as to who will be the chief ministerial face in 2022 Punjab assembly polls,” he remarked.

On the Congress-led government announcing a reduction in value added tax (VAT) on petrol and diesel, making them cheaper by Rs 10 and Rs 5 per litre respectively in the state, Badal asked whether Channi was against farmers as he had reduced the price of diesel by just Rs 5 per litre.

“Why diesel was not reduced by Rs 10 like petrol,” he asked.

Badal advised Channi to serve the people of Punjab even if he has been given the opportunity for only two months.

Asked about his stand over the appointments of high-rank officials, Badal asserted that it was prerogative of the chief minister to appoint the chief secretary, DGP, advocate general and others while the party president has got nothing to do with it.

Over a month after announcing his resignation as the state Congress chief, Sidhu withdrew it on Friday.

However, he said he would re-assume charge only after the state government replaced the advocate general.

Sidhu had earlier expressed his reservations over the appointment of senior advocate A P S Deol as the state’s advocate general.