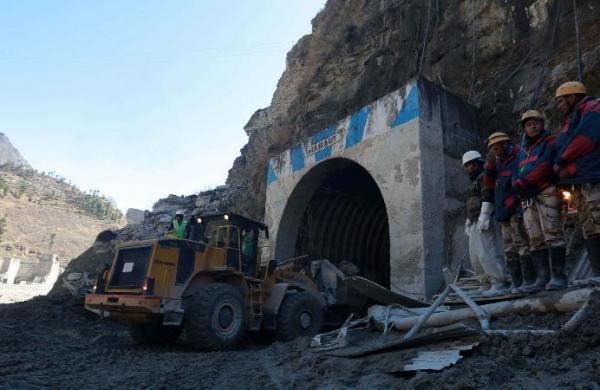 Express News Service
TAPOVAN: After changed strategy and temporary disruption by two hours on Thursday, rescue attempts to save the 37 trapped men at tunnel network in Tapovan Hydropower project seem like a long shot now as no official or agency is able to give any confirmation on how much more time it will take.

Another body was recovered on Thursday taking the tally to 35 while 169 are still missing.

Ravinath Raman, commissioner of Garhwal division of Uttarakhand said, “At this point of time, no one can tell how much time the operation will take. This is a developing situation and an unstable landscape. The response strategy keeps changing according to the developing situation. We are trying our level best and doing everything to save the men.”

The officials added that the terrain is a huge limitation to the rescue process.

When asked if there is any hope for survival of the trapped men, Ujjwal Bhattacharya, director projects, NTPC Limited which provides technical inputs and the layout of the project to the multi-agency rescue team said, “My priority is to rescue the men. We should all pray for them.”

Meanwhile, a high voltage drama ensued after water levels of Rishi Ganga and Dhauli Ganga rose due to which the rescue operation in Tapovan tunnel was suspended for two hours.

A warning was issued to evacuate the rescue spot and leave for high grounds just in case another flash flood comes.

The press conference by the combined team of state police, administration, NTPC and Indian Army was disrupted after a warning call from Raini village about rising levels of Rishi Ganga river came at around 2.10 pm.

The officials on the spot — the commissioner, the district magistrate, the superintendent of police, and the deputy inspector general who were in the conference ordered immediate evacuation.

Barring around 100 personnel from Indian Army, Indo-Tibetan Border Police and the Central Industrial Security Force, everyone left the spot for more than two hours.

Heavy machinery such as excavators, oil tankers were also moved to higher ground and were brought in only after 4 pm.

Earlier, drilling of the tunnel ground which started at around 3 am in the morning was stopped after over 9 hours when it reached a 6-meter-depth as sludge and water gushed in.

The officials from NTPC Limited said that the drilling was stopped fearing damages to the ground and because they feared that the excavator machines would get stuck.

Ujjwal Bhattacharya from NTPC Limited told, “We brought in two machines for drilling the ground of the tunnel. After the first machine did not work, we used the second one to drill the ground till 6 meters of depth. But then sludge and water started gushing and we had to suspend the drilling for the time being for safety of our men.”

After resumption, the excavators started clearing off sludge from the tunnel to make way for the rescue team to save the trapped men.

He added the data from the heli-bound Laser and Electromagnetic Pulse Imager and the data with the NTPC have been mapped together and analysed to see if there was a way to get any breakthrough in the ongoing operation.

Adding that right now his only priority is to rescue the trapped men Bhattacharya informed, “We have also started to look for two places for bodies at the site as the muck has receded a bit. Earlier, it was not possible due to high levels of sludge accumulation.”

NTPC officials said that they have every resource in tenfold needed for the operation in terms of machinery, expertise and manpower.

They also added that the project has a design with proper escape routes and that the workers are fully trained and equipped but the flash floods of such a scale rendered all training and backup escape routes futile.

“Our response time for any eventuality is half an hour. But in this case, the flash floods were of unprecedented scale. Water levels suddenly rose to 40 meters above normal. Unfortunately, our men did not get any time,” said Rajendra Prasad Ahirwar, project manager of the Tapovan Hydropower Project NTPC official.

Responding to the queries of whether the trapped workers were trained enough to deal with such a situation, he added, “Our whole crew is trained and equipped with necessary equipments. They are also given pep talks and are apprised about risks involved in such projects. Even the equipments they operate are licensed and tested with requisite certification.”

Meanwhile, Indian Navy teams have been deployed to look for bodies in Srinagar, 150 kms from the epicenter of the disaster and elsewhere given that bodies were washed away to various locations.

“Indian Navy divers are looking for videos at possible locations. We have also started last rites of the bodies which have crossed 72-hour time limit after being recovered. The villages which are cut off are being provided medical help and ration along with other assistance. There are places where chopper cannot land so we have dispatched teams which have called as much as 10kms in hilly terrain to deliver essential items,” said Swati Bhadauria, district magistrate of Chamoli.

“We should all pray to Baba Badri Vishal to save the men. Our officers are working day and night to save the lives of the men,” said the Governor.

The officials also told that reports of a lake formation in Rishi Ganga river in higher reaches have surfaced.

“A meeting has was held in this regard in Delhi. We will act as per the instructions of the higher authorities in this regard,” said the commissioner.

Meanwhile, the family and relatives anguish in pain of anticipation of the worst outcome.

Kailash Yadav has travelled from Siwan district of Bihar in hope that his brother, Subhash Yadav who worked as a welder in the project will be rescued soon.

“I am losing hope now. My family is already broken. These delays and disruptions are now taking a toll. I don’t know what to tell my family,” said Yadav.