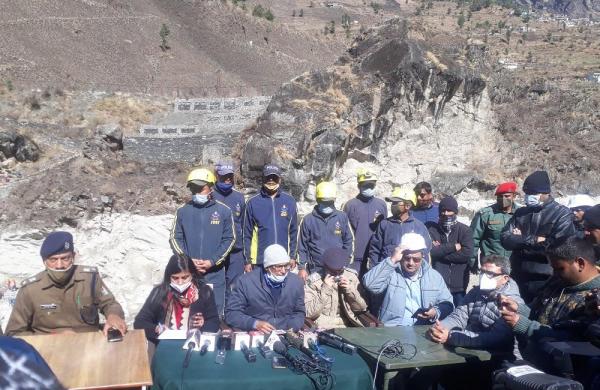 Express News Service
TAPOVAN: At the spot of the Tapovan tunnel rescue mission located near the Dhauli Ganga, more than 50 journalists and top officials were caught off guard by a warning call at around 2:10 pm.

“They said water levels are rising. Bhago Bhago yahan se!,” screamed a man amidst the gathering.

“I saw muddy water flowing rapidly. That meant there was a huge inflow from the higher mountains. I was scared for myself and for everyone. I called up and told my friend in Tapovan. I did not want what happened on Sunday repeat,” said Sohan Rana from Raini village who alerted people in Tapovan.

Mohan Singh, another resident of the village where the Chipko Movement started in 1973, said, “We saw a lot of water flow in Rishi Ganga. This was not the case yesterday. The dry patch was now overflowing with muddy water. This cannot be without water flowing in from the upper reaches like it did on Sunday flash floods. We cannot take any chances right now. We started making calls to everyone we knew was anywhere near the river.”

The people fled the spot while sirens, whistles and shouts filled the area struck by one the worst flashfloods of Uttarakhand.

The rescue operations were suspended temporarily only to resume after two hours at around 4 pm with excavators clearing the tunnel and the multi-agency rescue mission starting work.

“I got a call that the water was rising in Rishi Ganga at an alarming rate. I disconnected the call and shouted ‘Bhago Bhago’. I could not think of anything else,” says Rajesh Singh of Joshimath who was at the rescue spot with a friend.

Ravinath Raman, commissioner of Garhwal division who was one of the officials conducting the press conference which got disrupted said, “I immediately ordered everyone to leave the spot. We cannot take any chance,” said Raman.

Chauhan, who was the only one refusing to budge even after the siren went off shouted on top of his voice, “Pehle andar (inside the tunnel) walon ko bahar nikalo. Sab beh jaenge. (Get the men working in the tunnel first else they will be washed away.)”

When asked why he did not leave, he said, “Did you see the Army men leaving or any men from any other forces. We are trained to try to save others first. We know how to act instead of panic. Of course I was careful and confident that I can run and climb the high ground fast enough.”

Meanwhile, the news of a formation of a lake from the blockage of Rishi Ganga river trickled later in the day.

This was later confirmed by the officials.