Chamoli disaster: Nearby villagers climb up to the forest in bid to escape similar fate 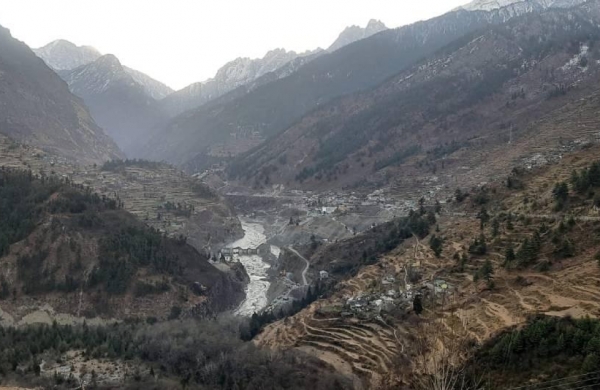 Express News Service
DEHRADUN: Scarred by the Chamoli disaster that happened on Sunday, nearly 400 residents of three villages, including Raini, have taken to the forest uphill for safety.

Sohan Rana, son of Gaura Devi, the woman who led Chipko Movement in 1973 said, “We are afraid of the disaster repeating. We don’t want to die in a flash flood while sleeping.”

The residents of the three villages – Raini Chak (Subhai) from where Gaura Devi hailed, Raini Chak (Laata), another village across the river and Jujjhu another village in the vicinity of glacier, have climbed all the way up the hill to find a suitable shelter to spend the night.

The populace of men, women, children, the old, and the infant are still at risk, as the villagers “are choosing to risk lives in both ways.”

“We are still afraid of floods and wild animal attacks,” Sangram Singh, a villager said adding that they have taken shelter in a dilapidated building and has started a fire to protect them from the chills and to repel wild animals.

At least 26 people have died and 197 are missing after a glacier broke off in Joshimath in Uttarakhand’s Chamoli district on Sunday, causing a massive flood in the Dhauli Ganga river and endangering the lives of people living along its banks.

Shobha Rana, a resident of Raini Chak (Laata) said, “We are carrying food, bedding, warm clothes and other essentials to spend the night.”

The locals said that they are planning to continue to do this until they feel safe.

Moving uphill in the wake of disasters is not new to one of the villagers, Balwant Singh (75) recalls when a similar situation unfolded in 1971, “The destruction didn’t measure up to this scale. We used to climb up and sleep in the forests.”

The residents of the area told The New Indian Express that they have been demanding the state government for a relocation.

“Our demands are not fancy. We are not asking the government to move us to Dehradun valley or Rishikesh. We are only asking them to move us somewhere near Auli or Joshimath where the danger to life is absent,” said Mohan Singh, a resident of Raini Chak (Subhai).

The residents added that their villages are listed by the government as risk-prone and that the people of these locations need to be relocated for safety.

According to data from the state government, more than 800 families from 28 villages located in risk-prone zones were rehabilitated to safer locations till last year.

A report by the state government following the 2013 disaster had revealed that Uttarakhand had 395 disaster-prone villages, of which 225 fall in the sensitive and 72 fall in the hypersensitive category.

Majority of these relocations have been done to the hill districts of Bageshwar, Tehri, Uttarkashi, Pauri, Chamoli and Rudryaprayag.

In financial year 2018-19, the government spent Rs 6.47 crore to shift 151 families from six villages and this year, 137 families of three villages have been relocated with cost of Rs 6.04 crore.