Chamoli disaster, a nightmare for eyewitnesses 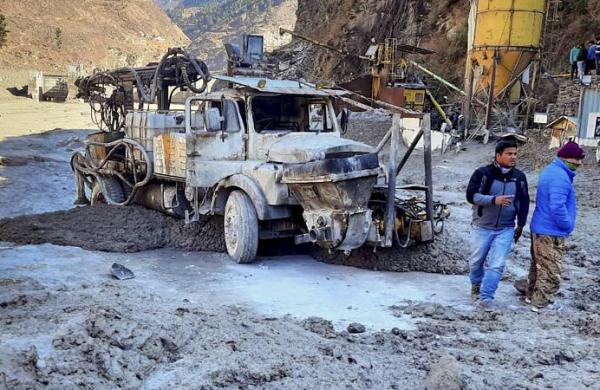 Express News Service
DEHRADUN: A laid back Sunday for Sandeep Nautiyal in Raini village was disrupted by the orchestra of noises and terrifying visuals of a glacier coming down.

As the avalanche started, 5 kms from where he stayed, he joined his neighbours and rushed out shouting ‘Bhaago bhaago.’

Everyone panicked and ran to alert others of the eventuality.

“It was a bright sunny day and suddenly we heard a mix of roaring sound and earthquake-like tremors. We looked towards the direction of the noise and saw this huge wave coming down the mountains washing away everything in its way,” said Nautiyal.

The village that houses more than 300 odd people, located near the Nanda Devi Biosphere Reserve, and in close proximity to the Valley of Flowers, include shepherds, farmers and workers.

“We are used to similar sights only in the monsoon season. In rainy season, it’s common to experience and witness landslides as water streams become alive and mountains seem more fragile than ever. This has shocked us to core,” said Shankar Rana, another resident.

The locals in the vicinity of the Dhauli ganga river have been moved to secure locations. Many are still in shock and apprehensive about returning to their villages any time soon.

Prem Butola, another resident said, “The incident has left a scar on our hearts and minds. We will not able to live in peace now. I hope the government will take measures to adress matters so that such disasters never happen.”

Sangram Singh, another resident of Raini village who had filed a public interest litigation in Uttarakhand High court in year 2019 requesting the court to stop the use of explosives said, “We were fearing that this would happen for so long.

I approached the court on behalf of the village residents and told the honorable court about the impending disaster. The court had directed the government to stop using explosives and take necessary steps but nothing happened. Now lives are lost and we are uprooted from our lands.”