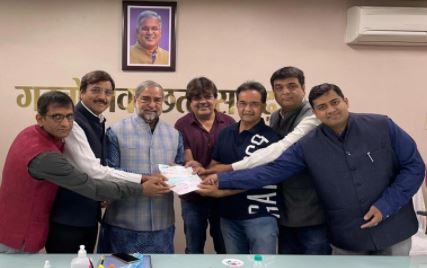 Officials of the Chhattisgarh Chamber of Commerce and Industries have jointly taken the initiative to settle the capital’s wholesale electronics market outside the city. In order to consolidate the electronic wholesale market to a certain place, the Chamber officials along with the Electronics Association businessmen met the Chairman of Raipur Development Authority. During this meeting, businessmen handed over checks worth Rs 5 crore to 106 shops.

We will take this scheme not only in the capital city of Raipur but also in all the major cities of the state so that the businessmen reaching from other states or nearby can get everything in one place. ” , Rajesh Vaswani, Nikesh Bardia, Vinay Bajaj, Sudesh Mandyan, along with presidents of the association from the electronic market, Mahendra Talreja, Manohar Wadhwani, Sumit Meghani were present. The wholesale market of many businesses, including oil, jaggery, has been shifted to Doomratrai, after success and systematic operations, preparations were made to shift to other businesses.

Successful efforts were also made by the then chamber officials Srichand Sundrani and Jitendra Barlotta for this shifting of wholesale trade in the Doomratrai wholesale market. All wholesale businesses operating within the city will be shifted to these shops. In which the Transport Association has given its consent to various shops including 100 shops, 70 shops of RDA building. Apart from this, chamber officials are discussing with them to cover other wholesale businessmen in one place. The special thing about these shops being given by RDA is that the shop which is being given to the traders here is not on lease in any way. Nor will any of his land rent be taken from them. These shops will be directly registered by the Raipur Development Authority in the names of the traders. After which they will be owned by the shop.